Tuesday: the pig breeder and then lunch at La Nonna Bianca

Phew. I have been in more than one barn in my time but never one that smelled like Tuesday’s. This was a day to sober the hardiest meat eater: when we parted ways at the end of it I was reminded of people leaving a funeral.

Our guide through this version of hell was Francesco Sciarrone, the veterinarian and meat inspector who had previously talked to us about animal welfare and slaughterhouses. He and the pig breeder answered questions afterward, and at one point someone asked him how he felt about eating pork, witnessing as he does the entire grim saga from industrial pig production through slaughter every day.

Traditionally, he observed, people ate meat once a week, or maybe every couple of weeks; nowadays we expect meat every day, even several times a day. So, his implicit reply was: if you want meat every day, this is the market economy’s way of fulfilling that request.

He told us he himself doesn’t eat meat every day; he has it maybe once a week, and for that he goes to the butcher in his town, so he knows how the meat was raised and who is slaughtering and processing it. So he pays four, five or maybe six times what we’d pay for the meat of the animals in those hellish sheds, but that’s what it costs to raise it humanely. And he’s fortunate to be in a part of the world where small scale butchers have not yet been entirely driven out of business by supermarkets. (I recently saw some figures for England: The number of butchers in Britain has declined from 22,900 in 1980 to 6,600 in 2005.)

I guess that makes it vote with your feet time. Here’s the Italian version of where that pork chop on your plate comes from:

We kitted up in some protective plastic for the occasion and that kept the muck off us (but was more for the protection of the pigs from infection). The smell when we walked in to the sow shed was overpowering, overwhelming, persistent. 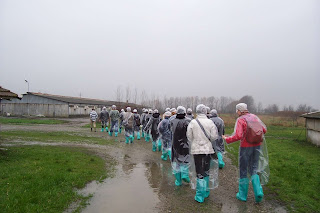 According to the EU, “Sow stalls are the most widely used housing system within the EU because they allow individual rationing, prevent aggression, are easy to manage and occupy little space. However, in some member states, the use of individual stalls for pregnant sows has been made illegal or is currently being phased out.” Signatory states have until 2013 to change their systems, but the stalls (aka gestation crates) can still be used to confine the sows for up to four weeks after gestation, according to the US Humane Society’s report on the subject (they also have a short video clip about sow stalls on their website). I was grateful to learn that the UK has banned these since 1999. I don’t know if there’s legislation governing this in Canada, but the largest pork producer in the US has just announced its intention to do away with them.

Anyway, here – from the point of insemination (usually artificial), for at least the next three weeks – they stand, sit or lie down, because that’s all they can do. 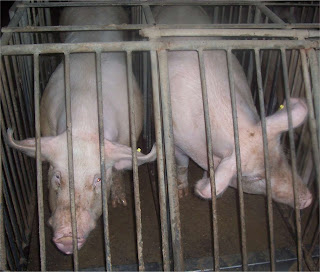 When after 21 days they are seen to be definitely pregnant, they are moved to another barn – which we didn’t see – to finish the gestation period, about three more months. (My reading tells me that at least 60 to 70% of US sows are housed in stalls throughout the entire gestation.) Presumably the ones who didn’t get pregnant the first time get to stand there for another round. If they’re lucky.

Then when they are ready to give birth, it’s into the farrowing crates; these too are designed so that the sow cannot turn or move other than to stand, sit and lie down, with what is called a “creep” area for the piglets to move around her. She is barricaded from them so that she does not lie on them (and damage the product). Even when they are safe from crushing, the farmer said there would be around a 10 percent mortality among the piglets, mainly from issues to do with development and feeding. 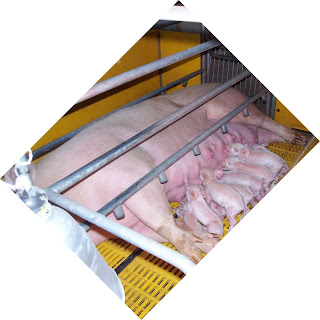 Once the piglets are weaned (by law when they are at least 4 weeks old), the sows are returned to what the EU coyly calls “service accommodation,” namely, in most cases, sow stalls. They can expect to live like this, moving back and forth from one crate to another, for their entire lives, which for good breeders last 6-7 litters (around 3 years). Longer lives than the pigs we eat, which are slaughtered when they reach prosciutto weight – about 9 months and 140kg.

When they’re weaned, the piglets move into teen (weaner) housing, kept in family groups. Not because we love them so, but because it keeps them from fighting for hierarchy and damaging the product. The promising ones – from a size point of view – are branded on the hips with PP – Per Prosciutto. We noticed this on some of the hams we saw at the prosciuttificio the day before. 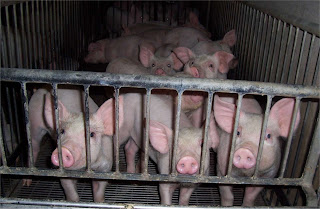 This is all the fresh air these pigs get in their lifetimes. 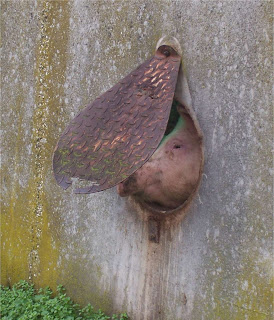 When you live in conditions like this, you get sick. This was the top of the nearly overflowing bin we passed on the way into the barn. Before slaughter, there’s a resting period for animals who’ve been on medication, to try to get the drugs out of their system – to minimise harm to the people who eat the product. 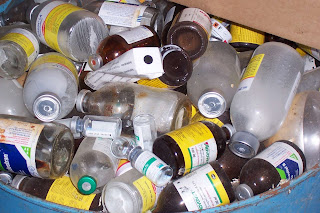 The illumination beyond the door, which looks like daylight, comes from the windowed or skylit outer areas of these barns; it’s not an outdoor run. 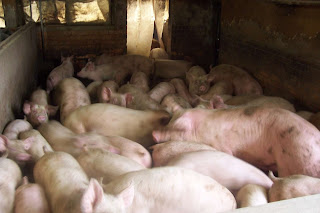 Again, kept in family or familiar groups to keep them from fighting. I guess this is where they stay either until they reach slaughter weight or until they are transferred to another farm to be “finished”. One thing I am guiltily grateful for: that our tour did not take place in the heat of summer, which I’m told is hot and humid – temperatures in the thirties and forties (celcius). I cannot imagine what those sheds must be like then. 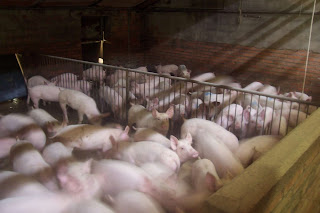 The smell hung around for hours as we debriefed soberly afterwards at La Nonna Bianca, the very trattoria that waylayed Carlo Petrini on his way to talk to us. Even without the salumi, which we declined, the meal was pork-heavy: this is after all pork country. We each said, I’m sure, our private apologies to the pigs on our plates. I mulled over what Petrini had said when asked about animal welfare, something poetic about how you eat the violence you wreak on other living beings.

So, the food began its march across our tables. Petrini’s favourite: tortelli verdi (what we’d call ravioli, though by definition, it seems that here, ravioli are meal-filled pasta; these vegetable ones are filled with ricotta and chard, or was it spinach), followed by equally sublime tortelli di zucca (sweet pumpkin filling) (–they disappeared too quickly to photograph), both served with butter and parmigiano–reggiano. 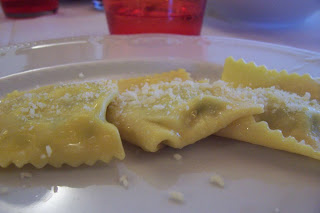 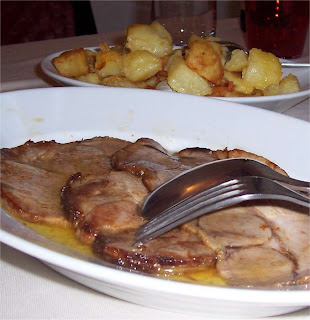 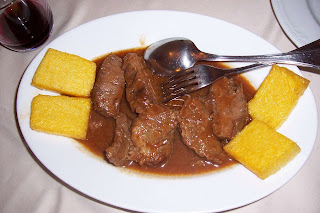