Please contact me if you are interested in any of the books below where I may have copies to sell. 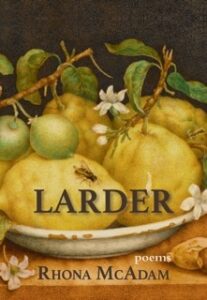 With enormous care and unquenchable daring, Rhona McAdam explores our relationship to the living world and challenges the constraints of contemporary poetry in her latest collection, Larder.

Lovely review of it in the British Columbia Review.

The Tyee recommended it this way: “Gardeners will love Rhona McAdam’s Larder, which considers the wireworm, the wasp, the wild bee, the ant taken over by zombie-ant fungus. Empathy with living creatures and plants that surround us doesn’t just mean understanding life, these poems emphasize; it also means getting one’s hands dirty with death and decay. “Preserving is work / and work is prayer, and this is a wall of it,” McAdam writes in “Abbey Root Cellar, February.” If that line plucks your heartstrings, dig into Larder.” Rhona McAdam’s sixth collection of poems, Ex-ville, reflects upon what we leave behind: the people, places and journeys that shape our lives.

One reviewer remarked “Whether it is on a bus, in a tired airport or a European city we’ve longed to see, Rhona McAdam makes us feel a little less like a stranger in a strange land.”

The poems, written between 2006 and 2013, have appeared in literary journals in Canada and the UK, and were anthologized in such works as Rocksalt: An Anthology of Contemporary BC Poetry, Force Field: 77 Women Poets of British Columbia and Untying The Apron: Daughters Remember Mothers of the 1950s. 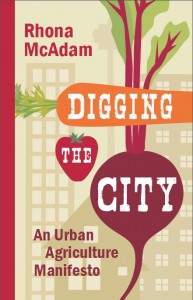 Digging the City: An Urban Agriculture Manifesto is nonfiction, a compact hardcover format, one of Rocky Mountain Books’ Manifesto series. One early reviewer liked that it

“stands out from other attempts to solve environmental crises for being so engagingly written. It’s a quiet book, a book of sadness even through its anger, so it reads a little like a manual, a little like a memoir, and a little like testimony. It’s personal, in the end, for all its careful detail about global crises and about local crises from around the world, and I mean that as praise for how neatly McAdam manages in Digging the City to sound like she’s chatting with her reader, rather than lecturing.” 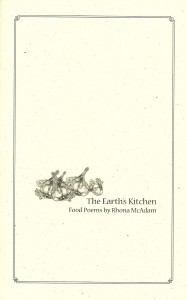 The Earth’s Kitchen is a small (11 poem) chapbook of food poems, one of eight chapbooks that made up the 2011 Gesture series from Leaf Press. “The poems address food and water in rants, recipe poems and food biographies. The poet brings to bear her considerable knowledge of food production and history in moods that range from wry to contemplative.” 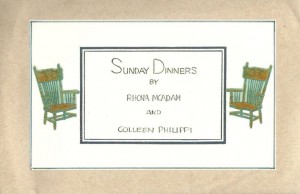 Sunday Dinners is a small (8 poem) limited edition collection of food poems, a collaboration with Calgary artist Colleen Philippi. Each poem is presented in a different, whimsical format, paying visual tribute to the memories that might be found folded for safekeeping in a family cookbook. 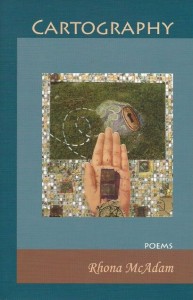 In Cartography, her fifth collection of poetry, Rhona McAdam weaves an imaginative passage through the territories of love, work, family and aging. The journeys she takes her readers on are odd, familiar and memorable: we travel with her through startling and sensuous reflections on love, office paperwork and corporate layoffs; teen murder, truck stops and dementia.

One reviewer found “These poems cover the gamut of concerns: love, work, family, aging, death, but they do it in an Anne Tyler sort of way. There is absolutely no fuss. These poems/reflections/laments/sermons come at you clean and clear and crisp, no misleading mystery, no tricks.” 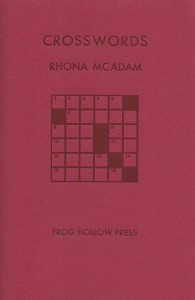 Crosswords brings together a half dozen favourite poems from past collections, covering the droll hilarity of soap operas, the tenderness of family cookbooks, and delicate takes on love and friendship. This letterpress collection was hand-set, printed and bound by Carole Wyse Peters.

Contents: Another Life to Live at the Edge of the Young & Restless Days of Our Lives; The Boston School of Cooking Cookbook; Crosswords; Brunch on the Hill; Thin Man. 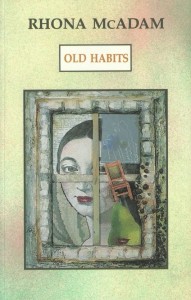 In Old Habits, McAdam’s poetry moves with grace and ease. Her images of everyday life are evocative and striking: rental houses wearily awaiting permanent residents; the awkwardness of long-distance lovers re-united; a treasured cookbook reduced to a lifetime of meals prepared and consumed. “Her cadences are regular, her language polished and trustworthy as old silver, her metaphors rich as aged port. These are beautiful, sad poems, well-wrought and solid as a pewter beer-mug.” (NeWest Review) 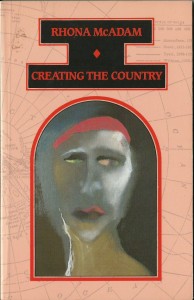 In Creating the Country, “Rhona McAdam writes poems that are simultaneously delicate, lyrical, sharp-edged, and satiric. There is often something deadly serious and intensely engaging under what appears to be a light surface.” (Prairie Fire) 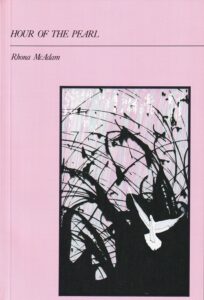 Hour of the Pearl won the Alberta Poetry Award for 1987 and includes photographs by Edmonton photographer Djavid Mostame. “McAdam’s work is rich with textured ambiguity. She charts both the phenomena of the natural world and the subtle filigree of social relations with an unusual organic imagery that is laced with menace. There is an inescapable sense of sex to McAdam’s new collection. Not a feminine (or even feminist) quality, but a dark and powerful current of femaleness.” (Edmonton Journal)