Wednesday: Culatello and the tale of the black pigs

What a difference Wednesday’s trip was from Tuesday’s. We travelled to the village of Polesine Parmense to visit the Antica Corte Pallavicina – home of some prized artesanal Culatello di Zibello and the much revered Al Cavallino Bianco (“white pony”) restaurant.

Polesine’s very name, according to our guide, means village that has been destroyed many times by the Po River (Po + lesionare/to damage), which has a history of flooding. Although it was very low when we were there – we couldn’t see any water at all from the banks we walked along – it did overwhelm this area massively in the floods of 2000 (which had also put another of the restaurants we’ve visited under water). The climate favours culatello production: high humidity coupled with great heat in the summer and cold temperatures – normally below freezing – in the winter. Artisanal culatello aging takes place in cellars, using windows to regulate the flow of air rather than automated humidity and temperature controls used in industrial production.

One of the cattle to be seen on the property where, later this summer, a high end Agriturismo will be opening, with guest rooms in the castle. 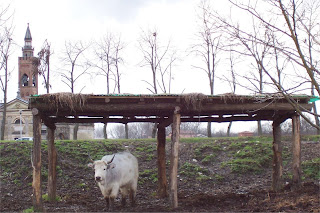 The place is owned by by the remarkable Spigaroli brothers. We were shown round by Luciano, the businessman; Massimo – a distinguished chef and president of the Culatello di Zabello consortium – was unfortunately away, but we heard a lot about him both from his brother and from last year’s students. Massimo’s passion for pigs is legendary, and he’s gone to astonishing lengths to build the farm’s heritage breed herd of 500 – the only free range culatello pigs in Italy we were told. This fact is not due to the innate cruelty of the Italians, but to the scarcity of land available to most pig farmers here (but why then, I wondered, is there free range pig farming in tiny wee England? More arable land than mountainous Italy, at a guess. And perhaps due in some part to the highly vocal, highly visible animal welfare lobby in that country which as far as I can tell has no real counterpart in Italy).

The pigs Massimo has found and raises to use for Culatello di Zibello for this operation are black pigs, similar to Spain’s Pata Negra (cerdo ibérico) pigs. They are free range only in the summer months and cost a lot to raise, because they are not suited to rearing indoors in crowded sheds like the prosciutto pigs. He wanted to raise them in traditional ways, using cereals produced on the farm. The only way he can do this is to fund the Culatello di Zibello production with income from the restaurant. 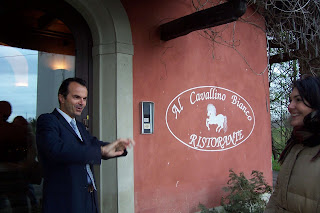 We started in the production area where some new pork thighs had just arrived. It’s a very small production, deliberately so, to control quality. The three men – Roberto, Carlo and Kumar (a vegtarian from India) – working the table were trimming and preparing the meat, which arrives in the same shape, more or less, as a prosciutto ham, but only the large part of the thigh is used, the bone is removed, and the meat is sewn into a pig bladder. The size of the pigs used for culatello production is different as well: these porkers are 250-300kg when they are slaughtered (as opposed to the 140kg prosciutto pigs – which are again bigger than commercial pigs from Northern Europe). So that makes them more expensive, because it costs more to raise pigs to this weight.

Roberto prepares to trim the ham. After he has trimmed and de-boned it, it’s whacked and trimmed precisely into its characteristic pear shape, then trussed, rubbed with locally produced Fontana wine and garlic, seasoned with salt and black pepper, and then refrigerated for ten days. 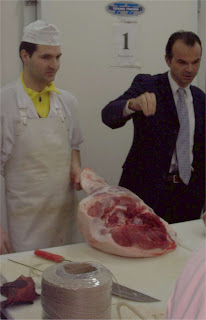 After ten days, during which time the ham is massaged daily, the ham is washed and placed in a pork bladder. Roberto stitches it closed: 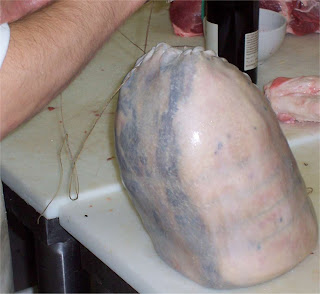 and weaves it into its characteristic shape with string: 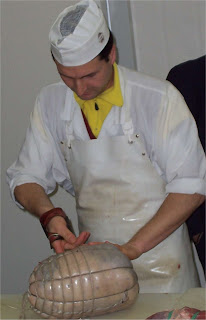 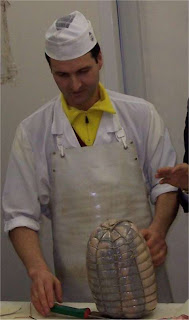 An artesanal Culatello di Zubello will carry three labels: one identifying it as Culatello di Zibello; one with the label of the consortium; and one with the label of the producer. What is sold in restaurants or delis as simply “culatello” is not produced in accordance with the consortium’s standards; what is sold as Culatello di Zibello DOP (and lacks that third tag) is not artesanal, using traditional aging cellars, but has been produced in the eight villages of the allowed region and is likely to be the product of an industrial scale production. 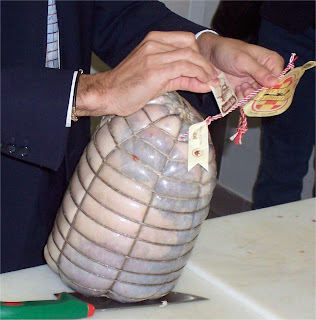 We moved into the cellars to inspect the culatellos hanging from the rafters, enjoying the Po breezes. 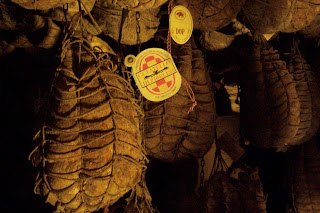 Moulds on the outside of the ham are part of the aging process, as the hams develop their character. 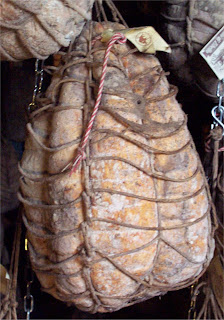 Some Culatello di Zibello that has been aged 21 months and sliced in the typical ultra-thin slices — which you can and should eat with your fingers.

Finally got to taste some lardo. And it was… lardy. But it had definite texture, a bit chewy, and the seasoning was lovely. Perhaps on hot toast it would be better. But I was swiftly distracted by the arrival of some awesome tortelli (hot and flowing with melting cheese and spinach.. or was it chard) and some interestingly flattened gnocchi in a tomato sauce. 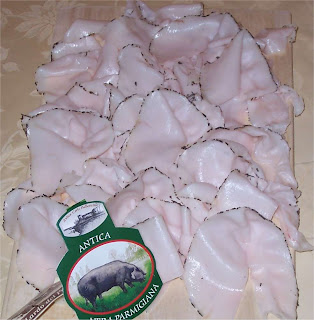 A fantastic cheese tray. Top row: not sure about the first one; second one is Gorgonzola (dolce); then Pecorino Toscano; Parmigiano Reggiano (24 months); bottom row: something very ripe and runny with black pepper coating (not sure what it was); bottom right-ish is Caprese (goat cheese) wrapped in chestnut leaves. 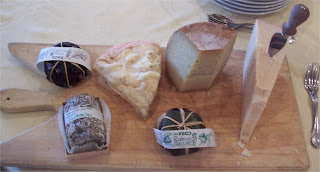 Dessert: a delicious, mildly alcoholic, vaguely custard-like, pebbled with almondy? crumbs signature dessert accompanied by gelato (frutta di bosco – berries or mele – apple). After coffee we sampled some of the house-made liqueurs and with the full complement of Antica Corte Pallavicina wares in front of us – half a dozen kinds of salami, Culatello di Zibello, wines, liqueurs – forthwith invested collectively and decisively in the retail side of the business. 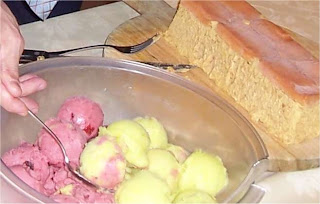