A meltingly sweet bit of salt-cured pork, sliced paper thin, draped on ripe melon: what could be better? A ham that is just ham and salt, no other ingredients; a bit of chemical magic. One of the most wonderful things about Italy, I always thought.

But that was on Monday. A bit predictably, I’m less keen having seen where the pork comes from.

But we start at the beginning, when we visited the Prosciutto di Parma Consortium office. Like most food consortia, this one spends much of its time and money defending the brand from imitators and fraudsters, who aim to confuse the market and reap the benefits without investing in the advertising. The consortium also has an active marketing program, both for the 82% internal and 18% international markets for its products. Not a small market either, with 10 million hams produced as Prosciutto di Parma alone: and there are scores of variations, sold simply as prosciutto crudo, or with other regional designations such as Prosciutto Toscano.

Prosciutto di Parma, a DOP designation, has a narrow and specialised definition. The pig must have been of the Large White, Landrance or Duroc breed, born and raised in one of the 11 regions of central-northern Italy specified in the regulations. It must be raised to a certain weight (a minimum of 140kg); the leg, weighing usually 10-14kg (for a finished weight of not less than seven kg), must be cut in a characteristic shape with a specific percentage of fat; it must be preserved using only salt, and aged for at least 10 months (- depending on weight – but at the production plant we visited, was at least 18 months).

After lunch (yes, it featured prosciutto) we visited a prosciuttificio, prosciutto producer, in Langhirano, a village where 50% of the Prosciutto di Parma is produced. Like all of the producers, it was located within the geographical boundaries of the Parma production area, 5 km south of the via Emilia, bordered to the east by the river Enza and on the west by the river Stirone, and up to an altitude of 900m.

Unfortunately we saw very little of the actual production, but were walked through the plant and shown the hams in various stages of curing. Interestingly we heard that every step in the process is a skilled one, but it is difficult to find people interested in working in this field nowadays, and a lot of the workers are Moslem – so they handle food they cannot eat. Here’s how it all went.

After arrival at the production centre from the slaughterhouse, and about 24 hours in cold storage, the pork legs have been cleaned and salted by machine and by hand, and set on these racks for a week or so, in la cella da prima sale – the room of first salting. Then another salting, and another 12-18 days cold storage, and then they hang for 60 to 70 days in refrigerated, humidity-controlled rooms. Lots and lots of legs. 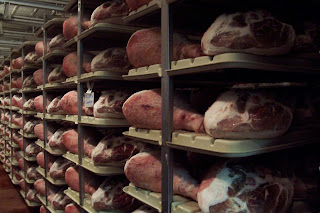 The hams are now finished with 100 days of salt curing. The salt has penetrated the meat through to the bone and the hams have been washed and brushed and hung in drying rooms, and then hung for another three months in “pre-curing” rooms. It’s time for their final aging, which will last another three to five months in the curing cellar. To soften the meat and prevent the hams from drying out, la sugna – lard mixed with a bit of pepper and perhaps some rice flour – is applied to the exposed surfaces of the meat. 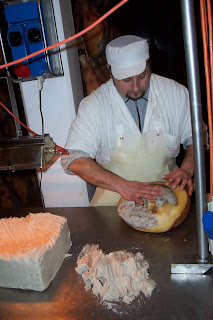 The final test; the ham is now fully cured and properly aged – a minimum of 18 months for the ones we saw; some connoisseurs prefer it aged 24-30 months, but this can be risky as the ham can develop a strong flavour, or become too dry if it’s at the older end of the spectrum. Using a tasto di prosciutti, a horse-bone needle prized for its porous quality, the inspector pierces the ham and then smells the needle to see if the aroma is one of cured ham or.. well, something less aromatic. 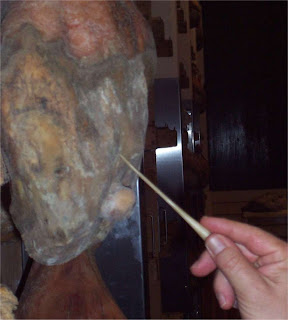 If it’s good, it can be sold as Prosciutto di Parma; you can see its ducal crown logo stamped on the rind of the whole ham, or recognise it by the consortium’s branding (a black triangle featuring the ducal crown on the corner of the packaging for pre-packed sliced ham). Shown here and in the testing, you can see the mould that develops naturally during the aging process. Before slicing for consumer use, the hams are brushed and cleaned of course, and the rind is removed. Wholesalers buy the hams and the retailers either de-bone them for slicing or cut them into (de-boned) chunks to sell for consumers to slice at home. 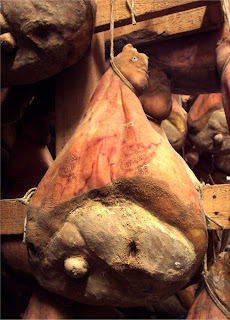