The cheese, the salt and the rennet

Can I just say for starters what a rare pleasure it is to be surrounded by 24 people who do not find it the slightest bit odd to take photographs of one’s meals?

Yesterday’s supper was a better class of leftovers: risotto al limone (con zucchini) (handcrafted by me), plus booty from the supermercato: marinated anchovies, marinated fresh artichoke, thin slices of Salamini Italiani alla Cacciatora and Grana Padano, and a sprinkling of tiny Sicilian olives. Followed by a thin wedge of panforte. Just because I can. 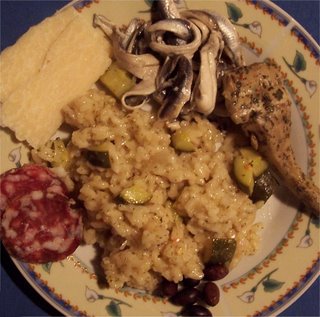 Tonight for supper I had some fresh pasta from the grocery store: ravioli con cervo – surely my first encounter with venison ravioli. I could taste a mild game quality to it, but it was subtle and a bit unremarkable. Either my tastebuds are blown from this neverending cold, or the taste was too delicate to make much impact on this overwhelmed palate.

Anyway, we also sampled some fresh mozzarella tonight – utterly sublime, and a more meaningful mouthful as we’d learned about the making of it in cheese technology class today. I had been reading, before I left Canada, about artisan cheese makers who still produce it by hand, but our instructor was dubious on that point: and given the kneading and stretching must be done on a cheese mass whose internal temperature is 60 degrees c, in a water held at about 80 degrees c, I imagine a few artisans of yore may have been a little relieved to turn the task over to machines. Still I’d like to know what the work did to or for their skin tone…

I remember having some dinner conversations before I left Victoria about why cheese was salted, and I’m happy to report back on that with some preliminary information. We learned a bit today about salination: how cheeses are salted in brine or with dry salting, depending on the type of cheese. The salting is done after the milk has coagulated, formed into curds, been put into moulds to shape them, and then pressed; and the salt reaches the inside of the cheese through osmosis. It serves not only to flavour the cheese but to act as a retardant to the growth of bacteria, yeast and mold, and to move – again through osmosis – more of the liquids out of the cheese, in the interests of its texture and water content. We’d heard about similar effects of salt on cured meat in our classes last week as well. But it’s an imperfect preservative system as there are more bacteria to be wary of than those who perish in salt, which is why, we were told, the rind of gorgonzola is not meant to be eaten.

We had as well some instruction on the matter of heat-treating milk, including pasteurisation and UHT. Suffice to say that what you gain in food safety by killing bacteria, you may lose in flavour and the ability of your milk to coagulate predictably.

Oh, and some interesting stuff about rennet, which I’ve known about and loved for its use in making Junket since my somewhat old fashioned and clearly politically incorrect childhood (any other Junket eaters out there?). But even so, I am aware there is a political issue about the use of rennet in vegetarian cheeses, and it is simply that purely vegetarian cheeses are made with an alternative to rennet – some kind of coagulating agent made from fungi, molds, bacteria, yeasts or plant sources, or more likely and reliably, genetically engineered micro-organisms. Because rennet is made from the abomasum (fourth stomach) of newborn calves (or lambikins or even kids in the case of goat cheese I suppose); and it takes, we were told, 5 stomachs to produce 1 gram of rennet. And that’s enough about all that for one day.

0 Responses to The cheese, the salt and the rennet