Today I slap down a mighty poetic gauntlet to you all. Who cares to write a poem using the word blet, or bletting?

While I was in England last month, Sue, her mum and I were discussing persimmons and sharon fruit at some considerable length, as you so often do while lingering over a beautiful tricoloured fruit salad of pomegranate seeds, blueberries and sharon fruit. Well perhaps linger isn’t quite the word for it. The moment my spoon hit the empty bowl for the last time I was off to find out what makes a persimmon different from sharon fruit. Here’s what I’ve found out so far. 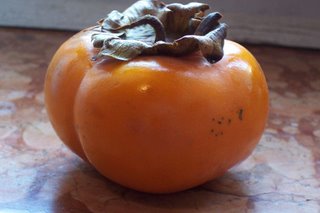 Persimmon (y’all knew that means “a dry fruit” in the Algonquin language, right?) is the family of fruit to which the sharon fruit belongs. It is divided into two types, the astringent and non-astringent, with a further sub-category of types which can have their astringency altered (in either direction) by pollination.

Astringent persimmons can still be eaten once their astringency (think soul-puckering dryness) has been removed, by (aha) bletting — a word coined in 1839 from the French world blessi, which denotes a particular type of bruised appearance found in fruits such as the medlar and the persimmon. The process is known as ammezzimento in Italiano.

Chemically speaking, bletting brings about an increase in sugars and a decrease in acids and tannins (tannins cause the unripe fruit to be puckery). In some cases bletting is simply a ripening process (the fruit is exposed to light frost for a few days after it is ripe), but in others there is a chemical process (water, alcohol or carbon dioxide treatments) used commercially to remove the astringency. Opposite to what we expect of some fruits, the persimmon can be stored at room temperature or softens more quickly if refrigerated.

Sharon fruit is a non-astringent persimmon, which means it doesn’t have to be as completely soft and ripe as other varieties in order to be enjoyed in, for example, a fruit salad. There is a trademarked version which is grown in Israel, but Spain and South Africa are also big producers, and it’s also grown in China, Japan, Korea, Italy, Greece, Turkey, USA, New Zealand, Australia, Chile, Brazil, Georgia and Iran (other forms of persimmon are grown widely in many other countries). It is rich in Vitamin A (Beta Carotene – for healthy skin, mucus membranes and night vision) as well as glucose, sodium, potassium, magnesium, iron, calcium and Vitamin C, and clocks in at only 71 calories per 100 grams.

The persimmon tree comes from the Ebony family (Ebenaceae), and it is sometimes grown as a wood rather than a fruit: its unusual heartwood has been used for veneer and specialty items, while its strength and shock resistant qualities have made it a popular choice for textile shuttles, billiard cues and heads for driver golf clubs. In some species (Diospyros ebenum) the wood is jet black, while in others (Diospyros virginiana) it is light-coloured and fine-grained, and in still others (Diospyros celebica) it is striped. The leaves of Diospyrus melanoxylon, also known as coromandel ebony or tendu, are used in India to make bidi cigarettes.

Known to the ancient Greeks, its scientific name, Diospyros, means “food of the Gods” (lit. “the wheat of Zeus”). The fruit variety known as the date plum (Diospyros lotus) is one of several fruits reputed to have been the ‘lotus’ of the so-called lotus-eaters of Homer’s Odyssey. 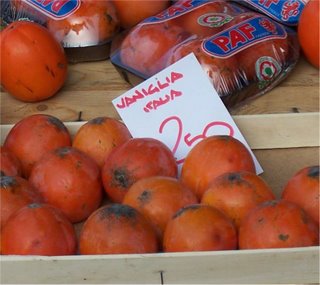 The familiar orange-coloured species which began in China and later introduced to North America and Europe is the kaki (cachi, cachi vaniglia or cachi mela in Italian) fruit (Diospyros kaki). Other varieties of the fruit you might encounter: black sapote (D. digyna, native to Mexico – starts green and ripens to black), mabolo or velvet-apple (D. discolor, a bright red variety from the Philippines), date-plum (D. lotus), fuzzy persimmon (D. pubescens), Texas persimmon (D. texana – once used by Native Americans as a dye to tan hides) and American/Common persimmon (D. virginiana) or “pawdad”.

A list of varieties that might be handy to learn:
* Astringent (need to be custard-soft to be edible): Eureka, Hachiya, Honan Red, Saijo, Tamopan, Tanenashi, Triumph (sold as Sharon Fruit when the astringency has been removed);
* Nonastringent (can be eaten when firm): Fuyu, Gosho/Giant Fuyu/O’Gosho/Hanagosho, Imoto, Izu, Jiro, Maekawajiro, Okugosho, Suruga;
* Nonastringent, but astringent if seedless: Chocolate, Gailey, Hyakume, Maru, Nishimura Wase

Well, there you have it. Interested parties may wish to start planning now to attend the annual persimmon festival held each September for the past sixty years in Mitchell, Indiana. 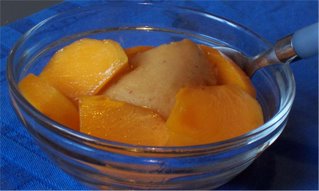 Meanwhile, we lucky parmigiani can bring home daily celebrations from Gelateria Grom, whose offerings include gelato di caco, very nice with some fresh slices of fruit!