Sweet Mama, what a week

Not a monumental one, but a week in which food and poetry converged at last.

Some good food coverage on CBC, including a week on hospital food, a whole series on food issues in the new India, and an interview with Michael Pollan.

I spent one morning of slashing rain interspersed with bright sunshine driving up the Saanich Peninsula to my favourite grocery stop, Michell Brothers Farm, where I loaded up on leeks, tubers, squash and other winter vegetables. Then on to Dan’s Farm Shop to pick up a Farmer Dan’s Chicken and some organic chicken sausages, and then home to puzzle over my bounty. I had some leek & yogurt soup with dried mint, (using a broth made of my last Farmer Dan’s Chicken) which was fabulous and just as I remembered it.

I am looking forward to eating the Sweet Mama squash which Michell’s grows. My clever cousin, who had encountered it first in New Zealand where they ate it with roast lamb, told me to slice it into wedges and roast it, with or without other vegetables or a Sunday joint, which I have been doing – it’s wonderful, including the skin, very sweet and moist. Michell’s sells both Sweet Mama and Buttercup which looks almost indistinguishable, which got me to wondering about it. 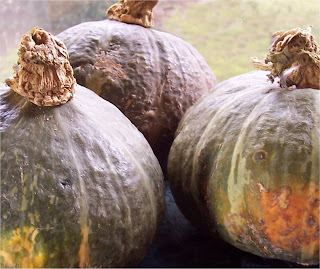 Apparently it is a kabocha (Japanese pumpkin) variety. It can be cooked in Mirin, soy sauce and broth and if you ignore the advice about skinning it, eaten whole that way, a very waste not want not recipe, or you can make it into soup – though you’ll probably have to sacrifice the skin (thinner and more tender than most squash I’ve found, and also tasty) for aesthetic reasons. You could also use it in a pumpkin risotto.

The bad news for growers is that it’s a hybrid and according to at least one source, can’t be grown through seed saving.

I went to Planet Earth Poetry last night, for the first time since my return. It was the first reading of the new year and the place was heaving with youth and energy. There was a lengthy open mike, of good standard – including Linda Rogers, Barbara Pelman, Yvonne Blomer and Pam Porter – all of whom recently had Christmas poems in great big pages of the local paper. Then as ever the young scamps who’d just come to read or hear their buddies in the open mike disappeared and paying seats opened up for the main acts. Sina Queyras flew in from Montreal and young performance poet Martin Hazelboweer paddled over from Vancouver. Queyras had a satisfying revenge poem, The Tummy-Flat Girls, about some of her more resistant ex-students; it showcased well an interesting poetic quirk, a kind of list form (or ok, let’s call it anaphora) which seems to feature in pretty much all her poems.