The day after the BC government announced funding for improvements for the province’s transportation, I travelled from Victoria to Vancouver using only public transportation. For those not familiar with the art of getting off this island, my options were:

1. Fly: from the Inner Harbour, round-trip fares run about $275 (tax included) on a seaplane; airport to airport it’s about $300, plus local travel costs. I guess it would take 2-3 hours door to door. Each direction.

3. Private bus line (this company has a monopoly on direct non-stop service to and from ferry terminals on both sides): the round-trip cost would be $83.00 plus about $10 in local bus fares, and it would have taken (door to door) about 5 hours in each direction.

4. Public bus service: the round trip cost was $39.60 and it took me about 6 hours, door to door each way. Curiosities of public bus travel include: the Vancouver bus fare was a nice round $5 from Tsawwassen terminal, but they will only take coins! The Victoria bus that runs from Swartz Bay terminal to downtown costs $3 (and will take bills) but the route’s publicity shouts out that they have no room for luggage: We do our best to accommodate all customers, they tell us, but oversize luggage and backpacks can be difficult to accommodate on any transit system.

So whatever you do, you lose. Though I was happy with the economies of my route – and I managed to read all of Michael Pollan‘s terrific new book, In Defense of Food, during the trip, which put the ferry’s dismal food offerings into perspective. I was pleased to have brought my own: which was indeed food; not too much; mostly plants.

Once I arrived, I had just time to forage for a quick supper, and found some truly awful sushi on the food floor of an underground mall at Granville Station, then went on to an STC meeting to learn something about authoring documents with DITA.

The next day, to keep me from drifting too fully into the dark world of technical writing, I was whisked away to spend a delightful day touring some Italian groceries. Our first stop was the wonderful Cioffi’s, which has an awesome meat counter, generous offerings of salumi, olives and cheeses. I bought some taralli! and a few pieces of their excellent pancetta for our risotto of the evening; the staff were extremely kind and charming.

Then on to Ugo & Joe’s, which was very big and had lots and lots of meats and cheeses on offer, although I paused at seeing some cheese labelled as “Grana Parmigiano”… hmm; something not quite kosher there; because they were also selling cheese labelled Parmigiano-Reggiano, I wonder if the mystery cheese may have been my old friend Grana Padano, the labelling blurring some boundaries between two quite different products. Because both these cheeses are technically referred to as “Grana” cheeses, meaning they are similar styles of cheese – hard and granular – produced in much the same way (though the rules over milk quality and length of aging are the chief differences) it is technically correct to call the artisanal product Grana Parmigiano-Reggiano; what this particular shop meant by “Grana Parmigiano” will have to remain a mystery until my next visit.

After that, we were a little peckish, so we stopped at Pasticceria Italia where the pizza had been recommended to us. It looks like their bread can’t get any fresher as there was a customer outside cooling his loaves on the roof of his car when we got there. We bought a giant slab of tomato & cheese pizza, which was fabulous. The lovely woman behind the counter said to us, “See you tomorrow!” and we sure understood what she meant. 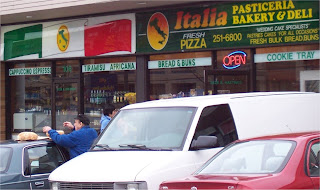 Then another treasure – Renzullo Food Market was compact but well-provisioned, and the owners were delightful, knowledgeable and friendly.

We then did a swift little tour of offerings on one corner of Commercial Drive. 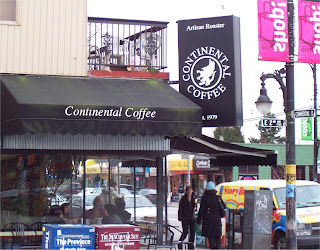 We stopped first at Fratelli bakery, then to the La Grotta del Formaggio (lots of cheese, yes, and a great selection of olive oils which we had to fight the crowd thronging the sandwich bar to get to). Most excitingly, I saw a familiar package on the pasta shelf: it was our old pal Spinosi from Le Marche! Very thrilling to know that his products have made it to this far outpost of the pasta eating world. 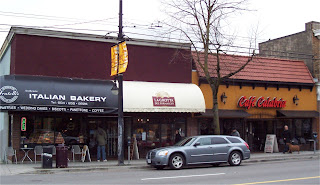 We then nipped down the block to the doors of JN & Z Deli which sadly for us were closed (winter holiday), and so we finally subsided with a giant, strong and beautiful cappuccino at Continental. 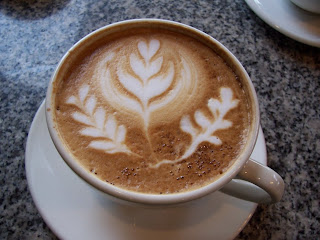 A final stop at Bosa‘s spacious big store, where I came away with a giant bag of beautiful fresh walnuts.