All kinds of water

Hard not to start the year in a state of environmental angst. Water is always topical here on Vancouver Island: we either have too much or too little at any given time. 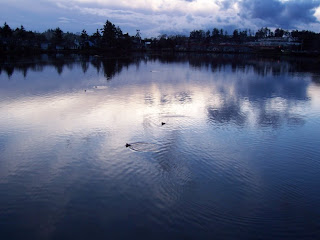 In this our water-fronted, rain-sodden wintertime in Victoria, it’s hard to look ahead to our annual drought season, or to grasp the issues around water waste through the year. So I was interested to hear Costing the Earth this week, which was about how each of us can make a small change to our lifestyles – including being more aware of water use – to improve our record on consumer waste, which contributes to all kinds of evil.

One of the things they talked about was the concept of embedded water – how much water does it take to produce, for example, a single pint of beer (170 litres). Meat is, as usual, the worst enemy: a hamburger (150g) takes 2,400 litres to produce, because of the water needed to raise the animal it comes from. That of course is before you factor in the climactic damage caused by clearing Amazonian rainforest to grow soya to feed northern hemisphere cattle.

The commentator spoke to an environmental activist who was so horrified by what he saw when he visited the Amazon some years ago, he came back to London and changed his life. Among the other things he did was to install solar panels – yes, in London – to heat his water, power his fridge and generate electricity in sufficient quantity to make him the first individual to sell power back to the national grid. He gathers rainwater from his roof to use for flushing his toilet and washing the floor, and meets 75% of his water needs that way.

Over and over the commentator asked, what about China? We could all bend backwards, lower the thermostat, keep our heating off when we’re not in the house, buy less of the things that will go to waste — and meanwhile the Chinese are striving for all they’re worth to be big wasteful consumers just like us.

And the answer was, set a new consumer/environmental standard for those who aspire to a good standard of living. And in doing that, remember that “every single small action you take does make a difference.”

Another bit of trivia I was reading about: the British Medical Journal‘s discounting of the 8 glasses of water a day rule that used to cause us all to have a glass, if not a beaker, of water at our desks over the last decade or two.

“There’s a lack of medical evidence showing you need to down this much water daily,” says the Globe & Mail.

This common prescription can be traced to a 1945 medical recommendation that stated: “A suitable allowance of water for adults is 2.5 litres daily in most instances. An ordinary standard for diverse persons is one ml for each calorie of food. Most of this quantity is contained in prepared foods.”

If the last, crucial sentence is ignored, the statement could be interpreted as an instruction to drink eight glasses of water a day. Evidence suggests you can meet all your fluid needs through food and other beverages including juices, milk and even caffeinated drinks.

And finally, maybe if we don’t have to drink so many glasses of it, we can cut our use of bottled water – with its embedded packaging, transport and retail costs – and go back to the tap. Gosh, who remembers drinking fountains?