Last week was a busy one for Vancouver Island’s food security community, with two significant meetings and a last Seedy Saturday on top.

Tuesday about 50 of us gathered at the university for Sharing Food and Knowledge, a meeting of people involved in food and educational issues convened with the support of UVic’s Office of Community Based Research (OCBR). We had a speedy stream of presentations, kicked off by one from Linda Geggie, introducing the afternoon with an overview of the OCBR’s Capacity-Building Project, which includes UVic and five Vancouver Island post-secondary institutions. Areas of interest include food security and sustainability, and the group aims, among other things, to capture, share and meet research requests by working with interns and researchers. They’ll also do a survey of programs and curricula as well as identifying areas of research already underway.

Other speakers included Steven Earle, from Vancouver Island University, speaking on peak oil and the future of food production on Vancouver Island. Some of the looming consequences of our current situation that he identified include

He was asked to provide some ideas about what needs to be done on the Island, and these include

Tom Child also spoke about his work studying environmental contaminants in the marine foods of coastal first nations in BC. Food sources he’s studying include harbour seals, dungeness crabs, sockeye salmon and butter clams. The highest PCB and PBDE levels he found were in seals (makes sense to find these things at the higher end of the food chain), but the sockeye has the highest consumption so its contamination levels will be the most important. 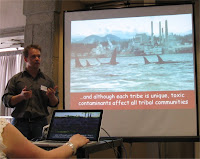 and Fiona Devereaux, who talked about the Feasting for Change project, which is part of the Aboriginal Diabetes Initiative

and aims to restore knowledge about aboriginal food traditions by putting youth and elders together to talk about traditional foods.

Wednesday was another work party at the farm 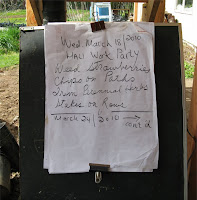 where preparations include moving strawberry runners into new beds:

Thursday evening a group of us got together to share some food and hammer out vision and mission statements for the Food committee of the Victoria Transition Town initiative.

Friday was Food Matters! – a day of workshops and local food hero celebrations. The meeting was held at the Native Friendship Centre and attracted lots of foodie folk from thither and yon. The day started with workshops, including one on community kitchens operating in Victoria. Some of these are participant-run, where people gather to share bigger cooking tasks, like canning, for largely social reasons (with some education picked up along the way) while others are funded and incline towards helping people on low incomes learn to manage food and nutrition through communal cooking. In both cases, participants work together to prepare meals or dishes on a large scale that are divided into portions to take home.

A lunch followed, which was a little disappointing – I played count the seasonal vegetables in the veggie wrap and came up with… one: asparagus, which is seasonal in California just now. It also featured zucchini, red pepper and eggplant (at best these last two will have come from BC greenhouses at this time of year, but that’s not an ideal source either). The halibut chowder 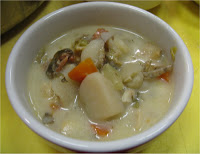 and the VNFC’s own community cooking enterprise: this brings locals together to prepare a soup each Friday for the centre’s Friday soup kitchen, which provides soup, bread and fruit to people who wish to participate. (But of course I have recently seen End of the Line and any fish consumption is now troubling to me.)

Linda Geggie read an excerpt from farmer-poet-novelist-memoirist Brian Brett’s Trauma Farm – a happy coincidence as later that evening I learned that Brian will be reading in Victoria next week. 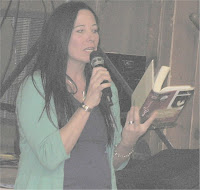 There was a talk by Gilbert Wilkes called Demystifying New Media: how media can help us reach and engage our audiences and each other. This covered a lot of ground and was particularly focused on ways foodies could use feeds and aggregators to filter food information.

At the end of the day I wandered out to see the garden that volunteers from the centre and the community have been building, and it is in enviable shape, all the raised beds waiting to be filled: 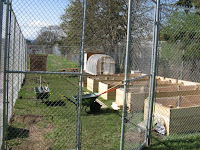 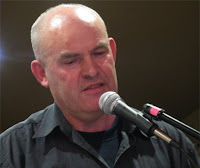 who gave us his first full reading, after several years of popular appearances at the open mic; and Richard Lemm, 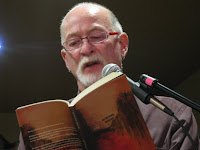