Last Saturday I attended the final Vancouver Island Seedy Saturday of the season, in Duncan. Lots of people wandered through, looking for seeds, seedlings and advice; there was a seed swap table

and a workshop series, as well as a chance for youngsters to hunt for worms in a wee pile of dirt. 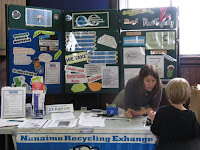 But before they entered the hall, visitors could stop to chat with a local forager, 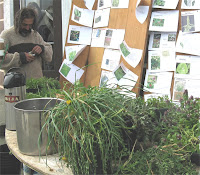 who had a table full of edible weeds, a pot full of burdock & dandelion root tea, 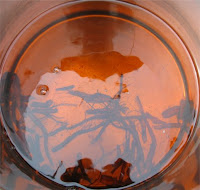 and lots of information and advice on using and eating native greenery, including dead nettle, which is blooming in many a local garden bed just now, and which resembles wheatgrass when juiced, and whose leaves can be eaten. 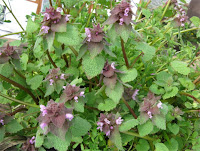 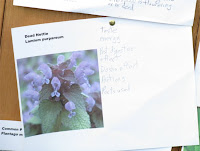 Meanwhile back inside, some interesting plants on offer.. 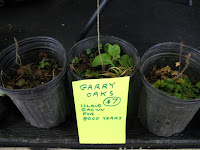 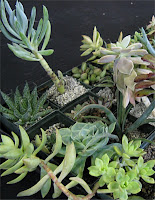 and Providence Farm, with a mixture of plant starts and produce 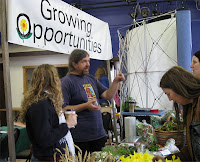 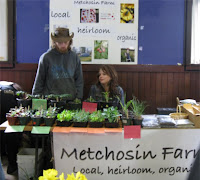 and of course Haliburton Farm was represented by some sturdy seedlings

and a fine farmer, Elmarie Roberts of Haliburton’s Sunbird Farm, which grows organic flowers and vegetables. 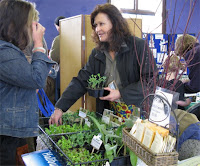 And then it was Monday again and time to gear up for a Slow Food Cheese & Charcuterie event at Sips Bistro. We began with the charcuterie, which included ham and headcheese from Choux Choux Charcuterie

and also duck prosciutto (one from Oyama Sausage Co. and one from Two Rivers Specialty Meats) and buendnerfleish, one made from beef (Oyama) and the other from muskox (Continental Sausage Co.)

before moving on to the cheese. Here we sampled a couple of soft cheeses – Natural Pastures‘ Comox Brie, followed by Little Qualicum‘s Island Bries. Then on to a couple of washed rind Cowichan Bay hard cheeses, from Hilary’s Cheese, both washed with Cherry Point Blackberry Port: Red Dawn (cow’s milk), and Belle Ann (goat). And finished with Hilary’s blue cheeses, one cow (Cow Bay Blue) and one goat (Valley Blue). 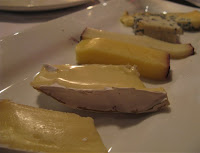 Hilary Abbott himself gave us an excellent talk about the cheeses, cheese making, milk production, blue cheese inoculation techniques and many related matters. 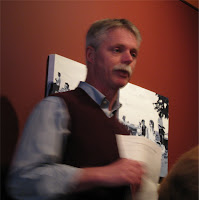 One Response to The last Seedy Saturday, and Slow Cheese & Charcuterie