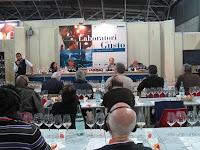 My last tasting at Salone del Gusto was a good ‘un. Slovenian Treasures introduced us to Slovenian sea bass, salt, oils, salumi products, as well as wonderful wines and elegant desserts, with a full range of characters to present them.

First up was Irena Fonda, 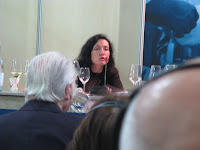 whose family business began when her father, a biologist, began farming sea bass, a local variety that spawned already in the waters at Portorož. They farm them in small quantities, giving their fish more space than usual and more time to grow: the average sea bass takes 4-5 years to reach a half-kilo in weight (they have one which has reached 7 years of age). They are bred in vastly smaller numbers than more commercial operations (about one-fifth) and get high-end feeds made in France and Italy, although these she admitted were all industrially produced. She pointed out that feed has the highest impact on the smell and taste of the fish, so must be chosen carefully. They also do not use antifouling agents which are pollutants commonly used in commercial productions and she felt were not particularly good for the health of fish or eater.

The first sample we tasted was sea bass sashimi 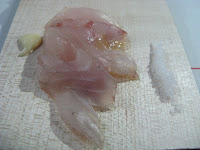 dressed with a little Slovenian olive oil and accompanied by local salt; fresh, delicate and slightly sweet. Next up was some warm poached fish served on truffle polenta, topped with a morsel of local cheese. Delicious. 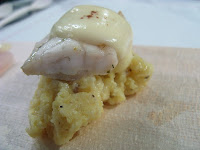 The proof being in the pudding, the third sample was smoked bass on a rucola salad topped with zabaglione. Very nice. 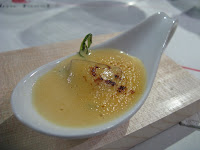 The salumi was from Arvaj, and included Slovenian prosciutto (pršut), hand-carved by the producer 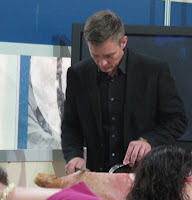 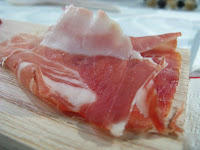 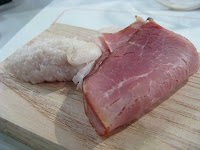 and some warm, smoked ham sausage (klobasa) that was tender and just plain delectable. 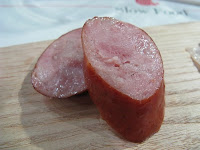 We had six different wines, and some entertainment from one of the producers. We started off with a Malvazija from Rojac, 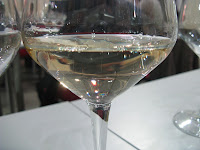 delicate and fresh enough not to overwhelm the fish, and then on to some wine theatre from 8th generation winemaker Aleš Kristancic, 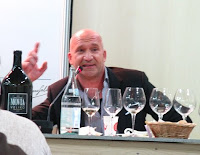 who waxed lyrical on life, wine and lots of other stuff. His wines included Veliko 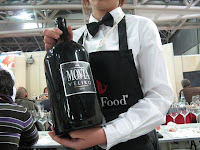 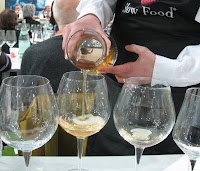 and what I think was his Puro, a pink sparkling wine he uncorked underwater 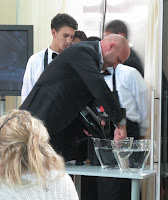 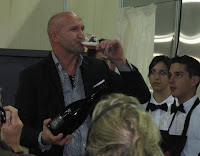 for reasons I confess not to fully understand. It was entertaining (and very good), and he had bottles of something even more special for a final toast I unfortunately couldn’t stay for.

A tough call but the two favourites of the day for me were from Uroš Rojac: 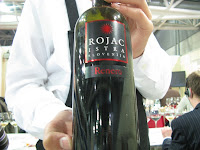 that clocked in at 15% and was dark, dense and fruity. A vigorous grape, the producer said, with little sugar and high acidity. The other wine he brought, which he’d bottled himself the night before, was (praise be) a 2006 passito: 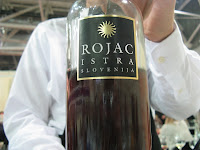 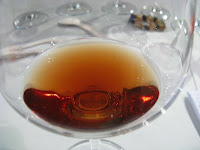 Austrian muscat grapes dried for about four months before a long, slow pressing followed by aging in stainless steel and then in wooden barrels for 3 years. Heaven. 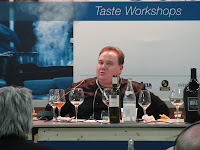 came out to introduce this charming and delicious trio of desserts: the first features pumpkin seed oil and pumpkin seeds; the last was a tiny almond cake, I think, which paired exquisitely with its cheese (I was beyond note taking by this point). 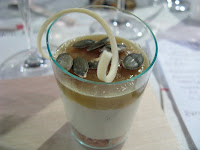 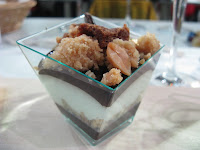 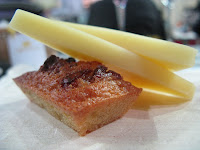 And with that the sun set on Slovenia and Salone del Gusto. Until the next time… 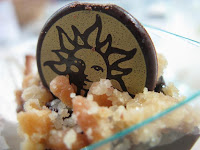