One of the great joys of Salone del Gusto is the opportunity to have some real face time with some of the foods that in their vast numbers tend to overwhelm one in the exhibition halls. For an hour or so you can rest your feet, meet some producers, and learn about their wares.

Urban agriculture has been on my mind in recent years, so I was happy to see a series this year called Feeding the City, which offered panels from Berlin, Milan and Paris. I couldn’t make the Berlin one, but I had two very different experiences in the others.

Milan put on an excellent show. A panel representing Nutrire Milano (Nourishing Milan) explained the idea behind their project, which was to see if it was possible to feed the city with food from the local area, a maximum of 40 km from the city centre. They brought a variety of products that used such products as raw milk, fruits, vegetables, honey and cured meats.

Two young cheesemakers offered us some excellent ricotta and mozzarella, and some sublime aged (2 years) cheese made from Jersey milk. 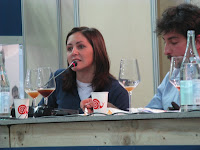 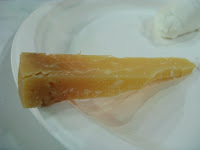 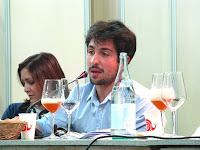 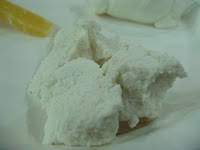 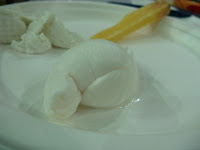 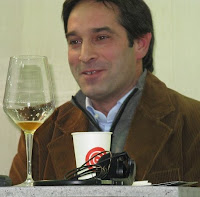 who is learning sausage-making from his octogenarian grandparents introduced his salame (Filzetta – named for the casing), 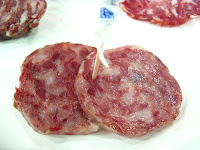 and liver mortadella, which had been ground with mortar and pestle in a method used before mechanization. 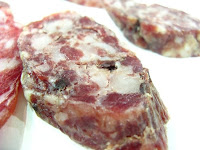 He uses natural curing in his half-dozen varieties, which are made between September and April (not in the summer when it would be too warm).

The monks were cloistered, so couldn’t come to introduce the beers themselves. They are Benedictines, who learned the brewing methods from Trappists, and ferment the beers in the bottle (like champagne). We had an amber and a dark one 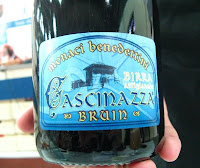 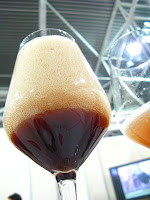 The maker of the goat cheese selection wasn’t there, but her handiwork was excellent. 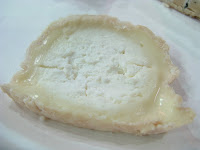 We had two variations of Tronchetto, one coated in ash and the other a blue. 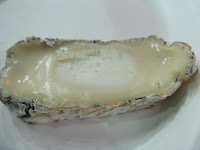 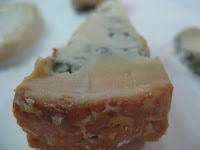 And one that had been aged in chestnut leaves. 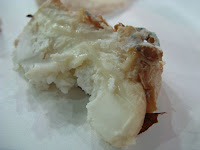 Mauro the apiarist urged us to save some of the goat cheese for tasting with the honeys he’d brought, observing that the bitterest (chestnut) was excellent with aged and blue cheeses (he was quite right). 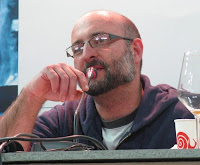 The honeys were (clockwise from the lower left): acacia, millefiore, tilia cordata (wild linden), castagno (chestnut), melata (honeydew). It was served with bread made from flour grown around Milan 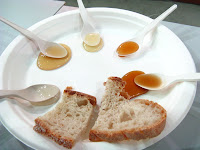 and baked by Davide Longoni who pointed out the connection between the words pane (bread), padre (father) and fame (hunger). His bread is big and broad; the kind of food for which you need a table, company and good wine, he said. He said it was flawed but he was learning how to work with the flour – the know-how of working with local “extreme” flours (with little gluten) to make traditional breads has been lost – but he hopes one day to produce loaves he’s happy with. 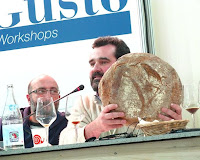 The Paris tasting could not have been more different, in every possible way. A sell-out crowd gathered, each relieved of 40 euros for the privilege of being there to – as it turns out – drink some beer and cider 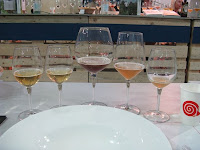 and (to be cruelly blunt) eat a bit of clear broth with half a charred onion floating in it.

It was good, but the experience left a definite bad taste in the mouth. Even the translation was crazy, after a commendably seamless week of simultaneous translation. Speakers said their bit in French; notes were taken and translated into Italian, which was then translated into English. Though we could pass the time looking at handsome slides from the handsome book that Michelin-starred chef Yannick Alléno 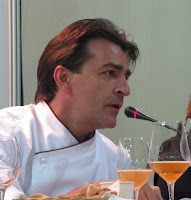 was flogging. Much was made by the panel host of the strikes in France and the difficulties of getting the panelists to their flights which had apparently been booked with odd timing that managed to cut the proceedings short. It is a shame the panelists hadn’t managed to pack a few more ingredients in their bags; I ended up feeling the same sense of rip-off that I have felt eating in Parisian restaurants. No, not all of them. But this was really no place to short-change your customers.

No “feed the city” sentiment at work here either. The young beerseller, SimonThillou (La Cave à Bulles) had knowledge and affection for the beers and ciders, Ok, admitting cliched expectation here but I was looking forward to a fleet of French wine, so the locally produced (from imported ingredients) beers and ciders – a bit sweet for my taste – from apples grown in the Isle de France, were disappointing. 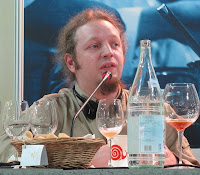 And Samuel Nahon’s Terroirs d’Avenir caters mostly to high-level chefs like Alléno. So how commendible is it to source local (Isle de France) artisanal product for a niche and exclusive market? Not sure; not (as I grumble) that we saw much of it. He declined to expound on difficulties he’d encountered, and simply explained that he’s providing a guaranteed market for low yield or “ugly” but delicious fruits and vegetables, and giving Parisians a chance to taste foods known by their grandparents. He does sell to the public somewhat spontaneously in “marchés éphemères” (pop-up markets) as well. 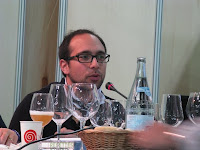