Wednesday’s schedule included a trip to la Riserva di Torre Guaceto where olive trees and other growing things are being protected. The olive trees we saw were at least 500 years old, and were part of a scheme to involve farmers in organic production methods by creating a co-op to produce and market organic extra-virgin olive oil. 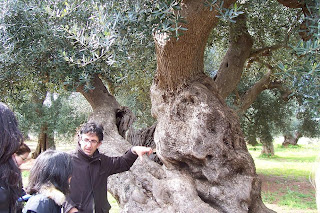 There is also a marine park which includes the beach below, which we were told accommodates as many as 5000 visitors a day in the summer. 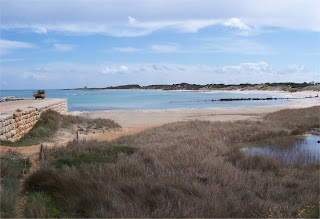 Although Italian marine parks like this one are off-limits to commercial fishermen, it seems that, through its conservation efforts, the reserve has enabled a 400% increase in fish stocks, and now a small local fishing enterprise is permitted, under strict scrutiny by the University of Lecce which monitors the size and type of fish that are caught. 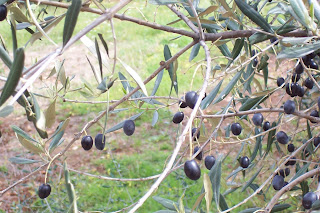 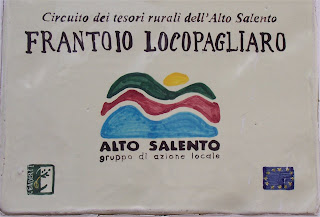 We travelled next to a restored olive mill, Frantoio Locopagliaro, in the midst of a large olive grove. Underground mills were once the norm in this area, because they were practical to build – aboveground constructions required specialised labour – and their rock ceilings could withstand the pressure exerted by manual presses. The underground setting also maintained the oil and processing at optimal temperatures. 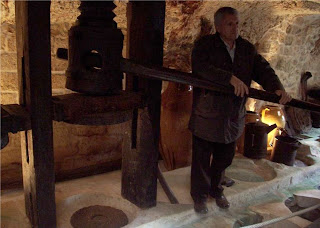 The press itself: after the olives and their stones were ground to a paste beneath horse-powered millstones, the paste was put in round woven baskets that were stacked and placed beneath the wooden screw which was turned by human effort. The oil was then separated from the rest of the liquid, and the paste was transferred for further pressing. 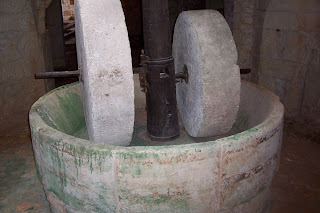 This olive crusher was used for the second crushing, to reduce the olive paste residue further for processing into lamp oil or other industrial use.

After a tasting of Puglian extra-virgin olive oils, we sat in intermittent sunshine to enjoy a terrific lunch which included such local novelties as chicory (a kind of spinach-like green) with pureed fava beans and roasted green peppers, a bit of burrata, some cacciocavallo, and a nice piece of capocollo tucked into an addictive little biscuit called taralli. And some lovely oily bread. And a glass of wine. 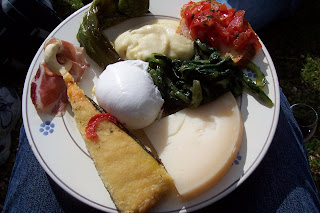 After this, we were whisked off to Ostuni – la Città Bianca – where we ascended to the summit for a quick look over the forests of olive trees below. 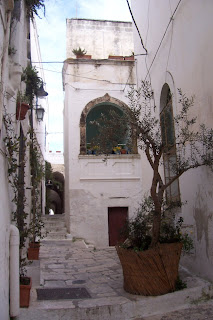 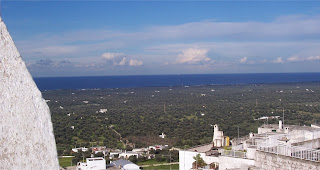 Then a speedy and very chilly visit to the vineyards, just starting to leaf, of Lomazzi & Sarli, who’d provided our previous night’s wines – including Dimastrodonato, a particularly good dessert wine made from a characteristic Pugliese grape (Aleatico) – and back we went to the hotel to rest up for supper. 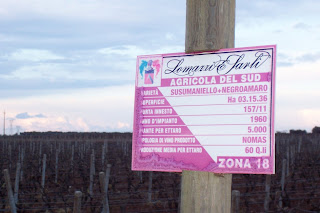