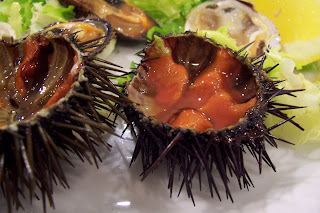 One of our speakers said he’d prefer to refer to the place we’ve been calling Puglia by its alternate and more ancient name, Apulia. We were rich in speakers this week.

Thursday we kicked off with a talk by eminent enologist Severino Garofano, about viticulture in the Mediterranean, as well as an overview of the Puglian grapes which we’d been encountering in liquid and nascent form all week. Negroamaro, primitivo, aleatico and susumaniello had all figured in our glasses, and we had a few more drops to sample the range of Garofano’s Azienda Monaci, over a lunch at our excellent hotel. It began with a clever little bundle of shellfish and ended with a triumph of torta: a warm, perfectly-sized almond souffle-ish marvel, melting with cream and a flourish of chocolate. 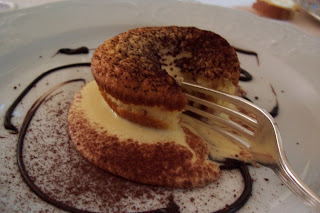 We took a chilly stroll through the vinyards of Tenute Rubino which are interlaced with fields of artichokes; a combination that works for me. The owners wanted us to get a sense of the land our evening wine would come from, and we certainly experienced the salt winds that flavour the grapes.

We travelled to Cisternino, a Slow City, where we enjoyed a meal of meat with our wine, in Rosticceria Antico Borgo Di Menga Piero, a fornello, a butcher shop where you can buy meat by day as in a regular butcher’s, but by night, when you approach the display cases as a steady stream of locals were doing, you choose your cut of meat much as North Americans might do with lobster. The offerings included involtini di trippa soffocati (tripe rolls), capretto (young goat), and costata di asino (donkey in a red sauce). 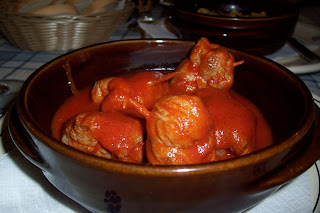 On Friday, there was another talk on fishing in the region which included discussion of garum, a Roman seasoning which lives on in the Vietnamese fish sauce nuoc mam, yet another food whose sustainability and provenance is under question (covered during the week in the (thanks Ruth) Christian Science Monitor).

We heard a lot about the different nets and traps used to catch seafood, including the technique of octopus-fishing requiring nothing more complicated than a chicken leg and a fishing line. Of course once you have your octopus you have to kill it, and then you have to beat it with a stick in order to tenderise it enough to eat. 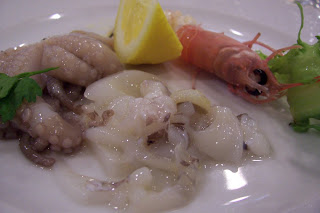 We were given the opportunity to taste it raw, an opportunity that I do not think I will need to seek out again. It made me think how nice is octopus simmered in red wine. Or cooked in anything, really. Ditto the cuttlefish.

After lunch we headed out to see where the meal had come from, to the docks at Brindisi. We were on the brink of turning back, as it was windy and it seemed the fishermen may not have gone out, when a boat returned and its cargo was swiftly unloaded for a speedy fish auction. 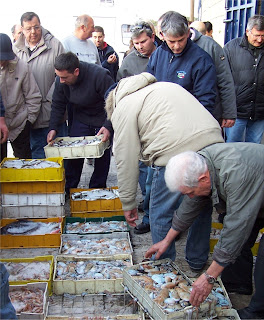 One last supper – at the stylish Menhir – where we dined on fish of many faces including some local clams with broad beans and orecchiette. 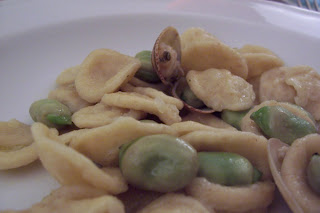 We had some beautiful wines from Candido, including a mind-blowing Aleatico dessert wine. Then, clutching our tums and our lovely Maglio easter eggs, we stumbled off to bed to ready ourselves for the flight back to Milan early the next morning. Enough eight course suppers to fell an ox, more wines than we could count on two hands, and more enlightenment about the variety of local food products in this area than we would have believed possible. Next stop Vinitaly, in Verona this weekend, where we’ll certainly be seeing several of the wine-makers we’ve already encountered on our travels in Le Marche and Puglia.