Greetings from Puglia, where pigs fly. 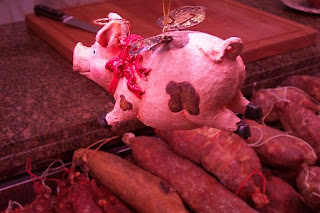 Here in the heel of Italy, the weather has turned wet and cold and I have passed on a trip to Lecce to catch up with a few things. Naturally now that I have made that decision the rain has lifted and the sun has come out… Ah well.

We arrived in Brindisi yesterday at a desperately early hour and carried on to IAMB, the Bari centre of the Mediterranean Agronomic Institute: we will be visiting the institute’s Chania centre when we visit Crete next month. 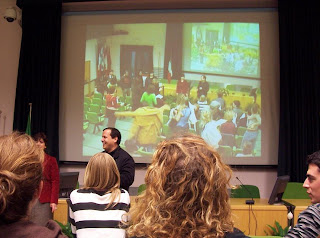 Our Escher moment at IAMB.

They offer research training to agronomists from Mediterranean countries to study such issues as irrigation and water management, aspects of organic agronomy, and methods of managing endemic insects such as the olive fly. 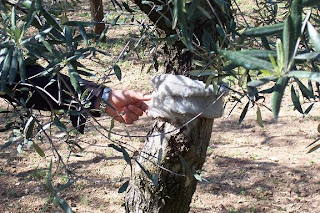 Clever way to catch crawly insects on an olive tree: a collar of fiberglass.

We had an incredibly good lunch of local dishes, many of them seafood, and then paused for half an hour or so to view the characteristic conical houses, the Trulli, which are found in abundance in the area but particularly in a town called Alberobello. 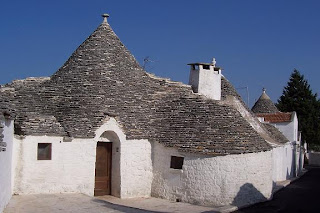 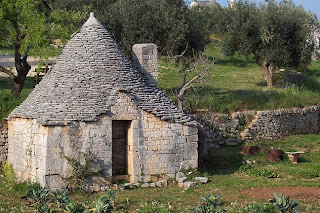 On we sped to our appointment with butchers in Martina Franca where we watched the making of capocollo, another cured meat made of a whole cut of pork. 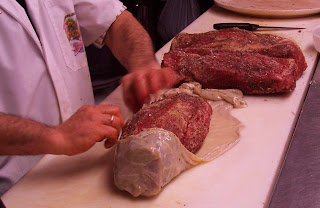 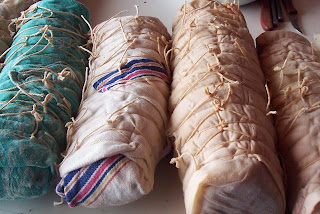 This one is trimmed to size, seasoned and dried for a few days, then marinated in boiled wine must and white wine, then wrapped in pork intestine, tied in a tea towel, dried a bit longer, unwrapped, hung to dry, then briefly smoked, and then hung again until start to finish it has gone through its paces for a total of about 120-150 days. By then it is a firm, sweet, slightly salty and lightly smoky treat, made in small quantities between October and Easter, when the climate is suitable for the cool dry winds it needs over part of the process.

After that we had a surprise gift of music and dance from a local folk troupe, then watched a bit of hand-crafting of orecchiette and maccheroni and sat down to another wonderful meal. We had a couple of soups – zuppa verde and zuppa di carciofi – and some pastas including the ones we had seen made. There was, for the strong, a further buffet featuring such specialties as Puglian salumi, raw artichoke and cheese salad, and a kind of risotto made with orzo (barley) and mushrooms. Some pastry and fruit followed, and a merciful sleep.

This morning we had a talk by Gino di Mitri, author of a book on Tarantism, the historic and region-specific ailment of Puglia, attributed to the bite of a spider, and which may have its pagan roots in Dionysian rituals, while its Christian expression took the form of prayers to St. Paul, saint of spiders. Affecting mainly, but not exclusively, women, tarantism was treated by music and a highly energetic dance, in which the sufferer used her body to describe the circumstances of the bite, and which ultimately evoked a trance that would allow the sufferer reconciliation with the spirit of the spider. The musicians – a tambourine player (almost exclusively female), accompanied by violin, guitar and accordion – would diagnose the colour of the spider, which corresponded to the nature of the ailment: for example, a blue spider would express melancholy and disharmony with the community. Homosexuality, we were told, was often entwined with the condition. Women who did not want to marry might claim to have been bitten, and the contaminating nature of the spider bite might in any case render them unmarriageable.

Last week is already a blur, but we had some wonderful people talking to us, including Stuart Franklin who walked us through a fraction of his formidable portfolio and spoke movingly about his latest project and forthcoming book on the changing landscapes of Europe, a depressing tale of overproduction, land-grabbing, overdevelopment and standardisation. We also enjoyed Richard Baudains who led us through some of the issues of wine reviewing: the extreme ends of its readership and the difficulties of communicating subjective analysis of an edible subject. We saw some wonderful films as well, from the Slow Food on Film curator, including a fantastic documentary called Life Running Out of Control which encapsulated the complex issues of genetic engineering, including the contamination of organic seed stocks by GM crops in North America, the risks to the farmers of India of the dubious economics of GM seed developers, and the moral and practical issues of experimental animal development. Shades of Oryx & Crake…