Jerusalem 3 and back to drizzle

Whoosh and here I am back from Israel, touched down briefly in London en route to Parma where I’ll be until I wrap up my Italian chapter in about two week’s time. I left London in a grey drizzle, and arrived to the very same in Parma.

The last day or so in Jerusalem was as rich as the rest of the week. Monday night four of us went for supper at a friend’s place, where we gathered under the stars on a terrace garlanded by flowers and herbs and overlooking a valley of lights. We were sat down with some good Israeli wine and bread, tahini, olives, salad and conversation, before a platter of goulash with rice and okra arrived, a bowl of parsley and lemon salad hard on its heels. When we had eaten, drunk, talked and laughed enough we drove off into the night.

Tuesday I had deemed museum day, but the museum played a trick on me and changed its hours, not opening until 4pm, a bit too late for me to start in on a place I’m told you needed to spend a few days to see properly. So I opted for the more manageable Museum of Islamic Art, which took me a couple of hours to see. It gave a good overview of its subject and included some beautiful tiles, jewellery, glass items, paintings, clocks and rugs. The display of enormous pieces of Yemeni wedding jewellery was really something: the tour guide said that when fully decked out a bride might be unable to stand unaided, and that this was considered a bonus, since neither would she be able to flee the ceremony. The changing exhibition space was on this occasion filled with examples of Anatolian kilim rugs, with a scrolling video showing the wool being shorn, carded, spun, dyed and woven these ones mainly by Yoruk tribeswomen.

Then out into the burning heat of day where Yaron, our dinner host from the night before, sped up in his chariot (white is, unsurprisingly, the colour of choice for Israeli automobiles) and whisked me away to the Hebrew University where we had a bite to eat in the surprisingly good university cafeteria (I opted for one more go at Israel’s national dish – Falafel!) and then we walked around the lush gardens and well kept campus admiring the flowers and contrast to the world outside its walls. We stopped in at the National Library, also on this campus, where there was a display of the library’s Haim Gouri archive, including a documentary the poet, soldier and film-maker had made about the attempts by Holocaust survivors to get to Israel through the British naval blockade of the country immediately after WW2. Tens of thousands were interned by the British on Cyprus until 1948 when Israel had the challenge of accommodating vast numbers of immigrants into a newly formed country.

And the challenges never stop in Jerusalem. The Montefiore Windmill 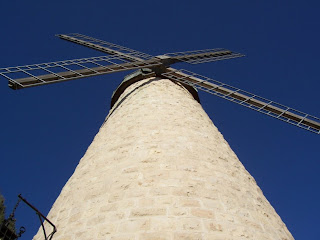 was built in 1857, to provide flour milling for the locals when civic planners tried to lure some of the population out of the Old City, which was becoming overcrowded. Depending on which sources you believe, the new neighbourhood, Yemin Moshe, either never actually used the windmill because, well, there wasn’t enough wind where it was set; or used it until more modern equipment made it obsolete. (Still, it makes a handsome landmark and has been turned into a museum to its maker, the surrounding houses used as artists’ and writers’ spaces.)

The area was populated but then gradually fell into decline, but in recent years has been upgraded into some of the top real estate in town, with some stunning views across to Mount Zion 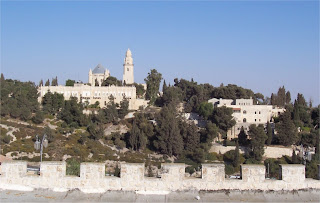 and beyond. In fact three wedding parties were there being photographed while we walked around. And an ironic photo that must be, to my visitors’ eyes, depending on the angle you choose: you could end up with the green and tranquil Hinnom Valley (also known as Gehenna, the Valley of Hell, it has a particularly complex history) 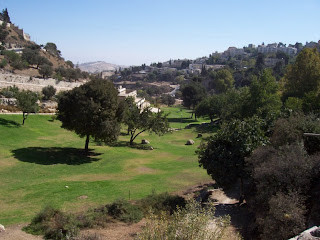 in the foreground and the Separation Wall behind it. 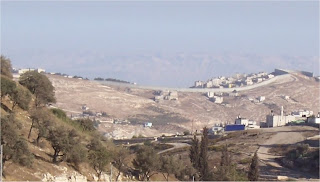 I guess you either embrace such monumental contradictions in Jerusalem, or go mad. Or both.

Well. Back home for a final supper with Susan whose wounded toe prevented her from joining us on an evening visit to the American Colony Hotel, a fabulous gift of a tour for my last night in Jerusalem. It began as a Christian utopian colony, founded in 1881 out of family tragedy by the Spaffords, a Chicago couple whose American followers were joined by Swedes; in the early 1900s they began providing accommodations to guests of Baron Ustinov (grandfather of Peter); then by turns during and after WWI provided war relief, food and medical services; was devastated by plagues of locusts in 1915; and served as an orphanage and even now provides medical treatment and outreach for Jerusalem’s Arab children and their families. It became a hotel in the 1950s and as such served as a neutral meeting point for Jews and Arabs, together with diplomats and foreigners, and continues today as a posh hang-out for UN staff, visiting dignitaries and pop celebrities. It’s a gorgeous place, but it was dark and the only photo I managed was this ceiling shot from a meeting room upstairs: 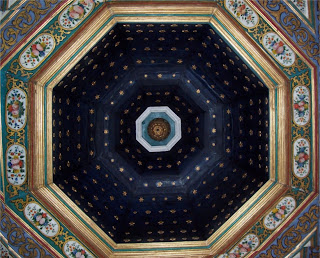 And then it was Wednesday and time to pack my bags. I went for a last walk along Bethlehem Road before the airport transport arrived to take me to Tel Aviv. Here’s a shop in a building of the typical blonde Jerusalem stone – blessedly cool in the fiercest heat – showing an interesting contradiction of cultures. (Ben & Jerry get around…) 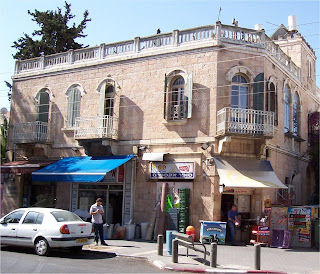 Recycling is more a vision than a reality just now. It seems the program is on hold and when the plastic bottles pile up high enough they get tipped in with the garbage. 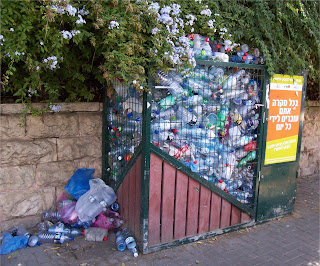 Corner fruit shop where I bought a couple of my giant pomegranates for breakfast; if you look closely at the back of the shop on the right you’ll see the ubiquitous juicer — so you can get your hit of ultra-fresh juice. And of course the street signs are trilingual. 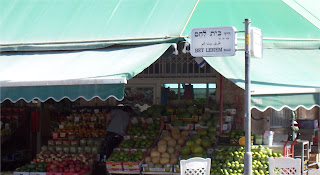