The visit has hardly begun and it’s already nearing its end. As everyone’s been telling me, a week isn’t nearly long enough to see Jerusalem properly, but my host and her friends have been doing their best to show me as much as possible. It’s been a lot of fun and given the autumnal chill in all my other homes, it’s been wonderful to enjoy some October heat and sun.

Saturday was one such day; hot, but not too hot, and so we packed up the dog and headed to the hills for a walk past pomegranate, 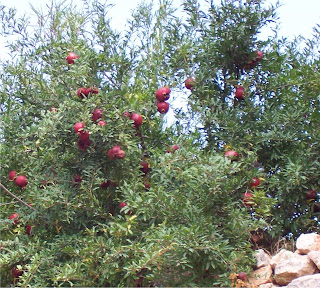 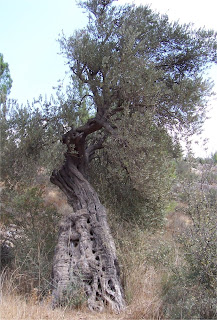 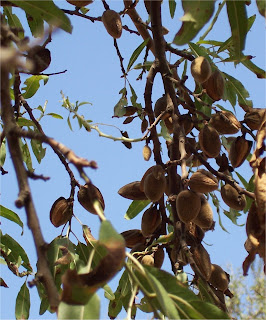 The area we drove past to begin our walk was one of the suburbs, a community like all such places with restrictions on who can live there — your eligibility is determined by a graphology test. These are used widely here, for everything official including screening job applicants. 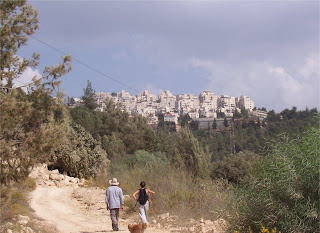 After our walk we stopped very briefly outside the walls of the Old City so I could slip in and see the Western (Wailing) Wall – divided like so many things here into separate sections for men and women – and fairly busy, it being Shabbat. Other restrictions are in place on this day which stretches from sundown on Friday to sundown on Saturday: no machines are to be used, which include light switches and vehicles, so there are few cars on the road, and no public transportation.

After sundown, then, we had about 20 of Susan’s friends arrive to have a poetry night – all were asked to write or bring a poem and about half a dozen did read poems, some of them written for the occasion. It was delightful and I enjoyed meeting everyone – a very friendly and interesting group of writers, teachers, social workers, academics and more, whose origins included Scotland, England and the US. We ate and read and drank and even sang for a while and then they all trickled out again into the warm evening air. My uninvited guest was another monster migraine which hammered away all night before slipping away in the morning.

So, off we went with Bailey dog for another walk, 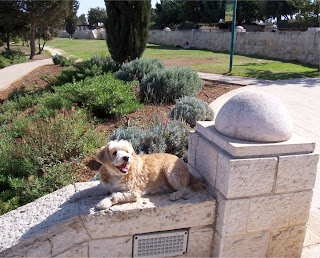 this time to Gabriel Sherover Promenade 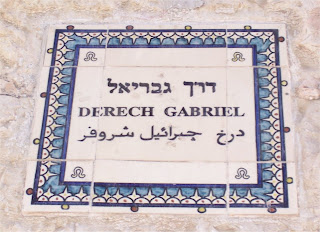 – a park built in 1989 on wasteland that had marked the division between Jews and Arabs until the Six Day War in 1967, and which overlooks all of Jerusalem, across the tops of Palestinian villages to the Separation Wall. The place commemorates the benefactor’s son Gabriel, who died of Aids in the 1980s. It’s beautifully maintained with a team of gardeners and maintenance workers who surpass what can be done in most municipal parks, but is little used, and on our walk around noon on Sunday – the schools are on strike and yet not a parent or child to be seen here – we met nobody but gardeners. Apparently its location above the Palestinian villages mean that it is a genuinely dangerous place by night, and an uneasy one by day. Sure can’t argue with the quality of the views from here though. 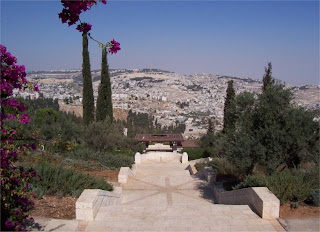 Then we had lunch with more of Susan’s friends, some leftover salads from the party, and afterwards went to meet another friend – a Scottish antiquities dealer – for a strong, cardamon-laced cup of coffee and the opportunity to watch him negotiating in Arabic over some oil lamps and pottery pieces, which was highly entertaining. While we waited for our coffee to brew, the Palestinian seller told us some of its local etiquette – whether or not you drink your host’s coffee will say much about your position on whatever else happens to be on the social or business table at the time; wryly he downed his second cup and left his wares in the buyer’s hands. I had a look at some ancient coins, rings, pottery and glass, and then was whisked away by my companions to do some more sight-seeing. We had a look in the Anglican School compound, 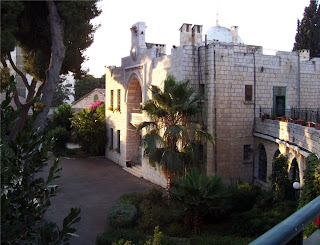 once a hospital, with various wards named after their benefactors, 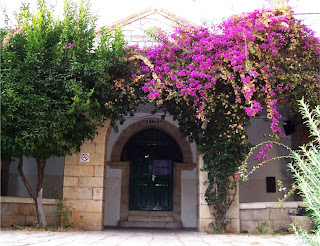 bits of it roofed in French tile, 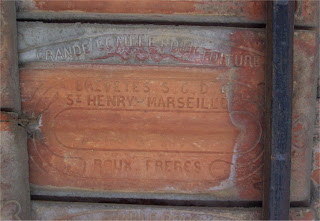 walked through the garden of Hunt house, where the sign said the poetess Rachel lived in a small house on the grounds until 1925. Then on through to the Ethiopian Church, 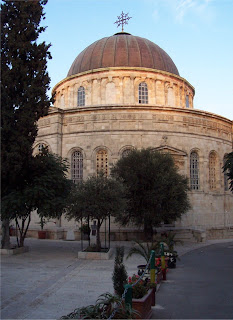 where a service was underway, and we entered and shoelessly crept around the circumference enjoying the painted blue dome and many paintings of the Lion of Judah who also guards the door. Across the road is the home of Eliezer Ben-Yehuda, the father of modern Hebrew, whose commemorative plaque keeps getting removed by ultra-orthodox Jews who believe Hebrew should be reserved for worship only, not wasted in daily conversation. Then past the big signs marking Mea She’arim district, warning about conservative dress for women, and up and down the streets for a while until there was no time left on the parking meter. On the way home we drove through some of the more interesting neighbourhoods – past the Islamic Art Museum and the President’s home.

Monday I walked through the Old City. I entered the Jaffa Gate and went through the Armenian Quarter until I reached a falafel stand at the edge of the Jewish Quarter, where I rested briefly until yet another man approached me offering his services as a tour guide and I gathered my strength and guidebook for another wander. This building, like so many others, was restored by benefactors who get their names etched in stone (these were from Toronto – there’s a not insignificant Canadian presence among buildings and benefactors in town). 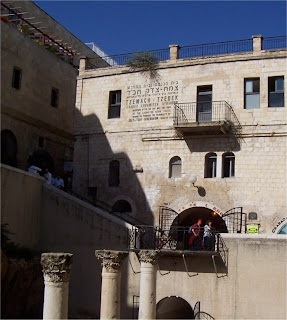 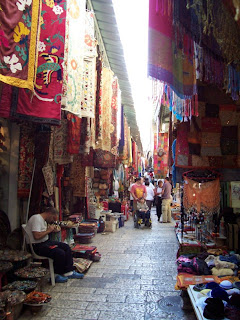 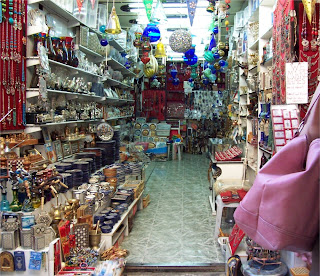 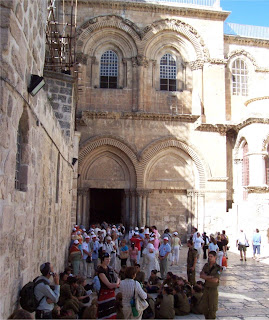 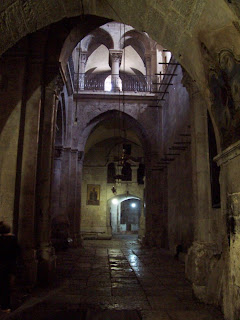 which is at the start of the Christian Quarter, so a well-rounded, four-quartered day. I spent an hour or so in the church (here’s the Stone of Unction) 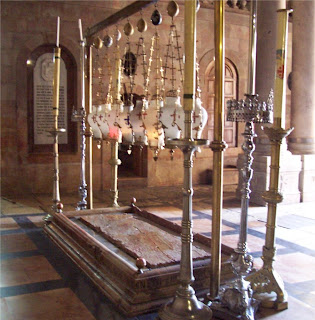 which was, like most historic places in today’s world, whether holy or not, subjected to the whirr and click of cameras and the strobing of flashbulbs (as they used to be known). (If it matters to my readers, I have turned the sound off on my camera and use no flash, particularly in settings like this one.) I was surprised they allowed cameras at all: they are strict on many other things, like the wearing of shorts and sleeveless blouses by women. Though I followed one woman wearing shorts and baseball cap and sporting a particularly large and obnoxious camera which she was deploying as close as possible to everything including the altar here in the Chapel of Calvary, 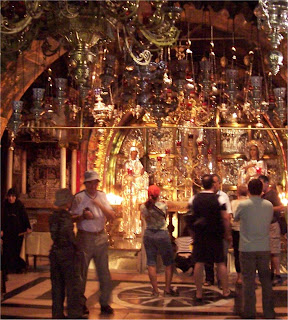 as oblivious to the worshippers – some of them prostrate – around and behind her as was her tour guide. The one thing I did see a priest come over and reprimand a seated woman for was crossing her legs; apparently crossing your arms is just as bad. Rules, rules. 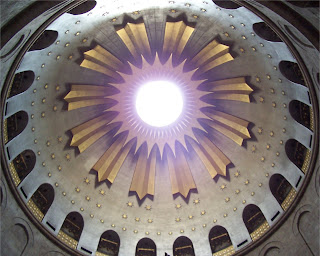 All done, I headed back to Jaffa Gate and paused to look at some postcards. When I asked how much they were I was told 2 shekels. I shook my head and walked off; “It’s too much?” said the trader, “I agree with you, too expensive. You can have them for 1 shekel.” Deals, deals. On my way out I was offered another tour guide and asked if I wanted to know where to shop. Enough!

This was the view from above Wolfson Garden: a pair of horses graze in the foreground, and on the hill, the wall curls away in the distance. 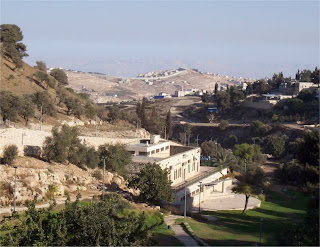 Even the crows are divided here: natty grey and black plumage. 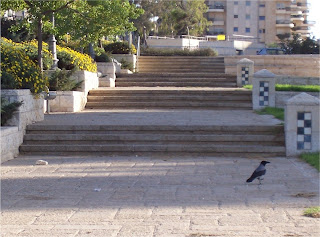 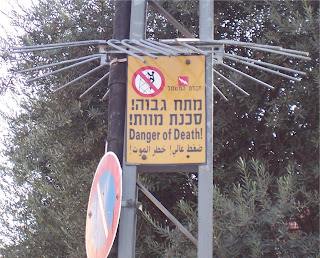