It’s been a pretty poetic week all in all. Monday evening I went to the South Bank to see Sean O’Brien and Ian Duhig read. I’d been admiring O’Brien’s latest, The Drowned Book, for the past couple of weeks, so was happy to hear him in person, and it turned out to be an auspicious week for him, winning his third Forward Prize a couple of days later. Ian Duhig won me over a couple of years ago with his wonderful ode to string vests, from The Lammas Hireling, and he gave an entertaining and eccentric reading from his new collection, The Speed of Dark.

Tuesday we went out to Troika, which I hadn’t visited for years, and ate too much (thanks for the cheesecake, Howard). 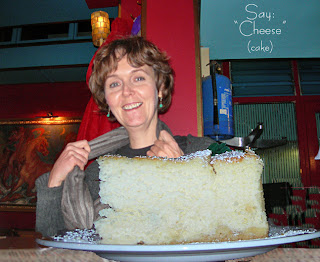 Wednesday I had a day off while I shifted myself to the next charitable bed, in lovely leafy Turnham Green.

And Friday was a start-to-finish day of culture, with some bee bim bap in the middle. I got to the British Museum, despite a painfully slow District Line, in time to collect my ticket and timed entry to the Terracotta Army exhibition. It was a great show; someone had told me the soldier count was only 17 figures (of a possible 7000) but the selling point – getting nose to nose with those present – was convincing, and it was a good thing to see as it’s been widely promoted and will be much talked about.

It was called The First Emperor, and was intended more as a briefing on the life (rather short – died at 49) and times of China’s first emperor, Qin Shihuangdi, and what had led him to have the army – plus civil servants, acrobats and musicians (perhaps they haven’t found the chefs yet) – and his still-buried tomb created on such a scale. Protection, company and entertainment in the afterlife, apparently. Not a nice man, I suppose, but one of awesome ambition. Probably not much liked by the conscripts (over over 700,000) who lived and died making his afterlife a happy one. I wonder where they ended up: let’s hope they are in a kind of eternal beach resort with the likes of those who built the pyramids.

The space chosen for this show was the grand old British Library Reading Room, which had had to be reinforced and rearranged for the occasion. I’d watched a television documentary about the show which gave some useful context for it, so I felt I got as much as I needed and made my way through in about an hour to meet Nancy for some coffee followed by aforementioned bee bim bap, which was good but, really, could not surpass the Bul Go Gi House‘s version, back in Edmonton.

At one of the Poetry School‘s 10th anniversary celebration events on Friday afternoon, there was a good showing for Eavan Boland (introduced by Michael Schmidt) who spoke delightfully and occasionally controversially about the place of the simile in modern poetry. Her first metaphor was a surprising one: she talked about how much she had enjoyed building computers, and how in about 1992 Unix lost its dominance to the appeal of GUI. Unix, she said, had been described to her as a language that spoke to the core of the machine, while GUI spoke to both machine and user. How right, she remarked, to lose a language that was facing inwards.

And went on to argue that the simile was the tool of epic poets, and was no longer relevant; poems and images should be an integrated whole where logic is suppressed and the reader engages to discover meaning instead of being handed it. Though there were some lovely similes in one of the poems she discussed (Sylvia Plath’s “Words“). Her own beautiful example was “The Black Lace Fan My Mother Gave Me“. She provided but didn’t speak to an old favourite of mine: “A Disused Shed in County Wexford” by Derek Mahon. (Which, as I had been talking with Nancy about ekphrasis earlier in the day, I decided could be identified as such, due to the presence of flashbulbs. So there.)

After a break, many of us and some more as well, reconvened to hear Boland in tandem with Robert Potts and Germaine Greer, with Schmidt again hosting events. The topic was Poetry Makes Nothing Happen and the response was, well, pretty much but that doesn’t make it a bad thing. Boland had some sharply phrased things to say about the death of pastoral poetry – gone forever, she observed, in a world where there can be no moral engagement with a nature we have destroyed. And when talk turned to the role of the poet in grappling with the harsh realities of our world, she invoked Seamus Heaney‘s Nobel speech, and the anecdote that speaks of being “caught between dread and witness”. Greer made some good points about the value of poetry that might make nothing happen in a world where too damn much is going on too fast to allow us to make sense of it (shades of Serge Latouche!). 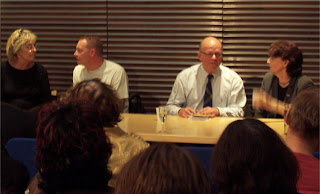