Saturday I overcame the weekend handicaps imposed by what are generously described as “improvements” on the Underground, and managed to arrive at Victoria coach station in time to welcome my classmate Jenn to London. Off we sped on the trusty number 11 bus, alighting beneath the shadow of St. Paul’s and walked unswayingly across the Millennium Bridge, and along the waterfront until we reached Borough Market, 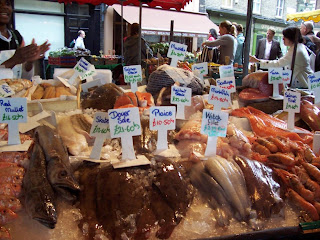 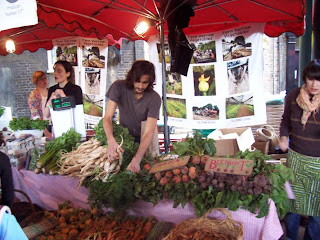 in good time for the launch of Biodynamic Food Fortnight. We managed to source some fantastic snacks before events began: a toasted Montgomery cheddar cheese sandwich 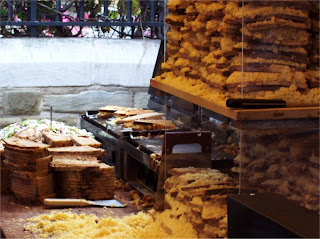 (watching the cheddar raclette being assembled 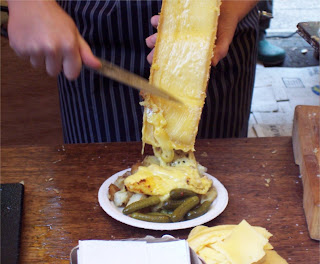 made me so faint I was forced to take a native oyster or two from a seventh generation oyster seller. 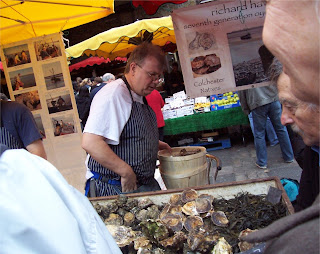 Revived, we ascended many stairs into the massively crowded Borough Market boardroom. The celebration was all around biodynamic farming methods, which we’d heard about on our trip to Crete. Basically it is to do with sustainable agricultural practices – including respecting the natural seasons of what you grow; organic – chemical free – farming; humane animal husbandry; and some extras that have to do with moon cycles and spirituality which believers say puts the farming back into the earth’s natural cycles. It arises from the work of Rudolf Steiner.

With listeners spilling out the door we had a couple of lively welcomes from guest chefs Michel Roux (Jr.) and Cyrus Todiwala. Roux extolled at some length the beauty of the biodynamic produce and meat he uses, concluding that it was for him a science of respect for the living things we consume. And then Todiwala gave an endearingly sprawling talk which tied together biodynamic farming, Zoroastrianism, poisoned vultures and the omnivores of India. (The poisoned vultures theme was interesting: he was speaking about the use of the anti-inflammatory drug Diclofenac, which is administered to farm animals and which poisons the kidneys of vultures, whose ecological role includes consuming carrion so that wild dogs – who can spread rabies – don’t. He didn’t mention the fact that farmers also deliberately poison vultures, believing them to spread disease among their livestock; and they can be accidentally poisoned by hunters using poisoned bait for other purposes)

We were by this time perishing from heat and overcrowding and too long standing, so we plunged back into the market, which – holy overcrowding! – by now looked like this: 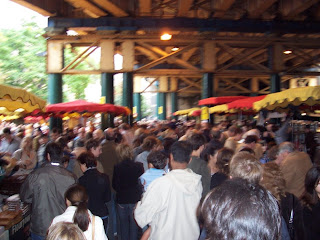 And pushed our way along, glimpsing wistfully a Comté cheese stand… 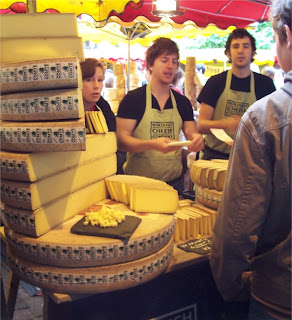 until we reached the oysters, 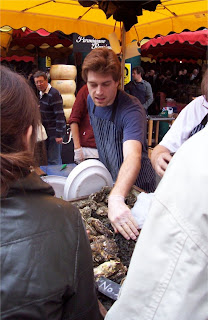 where we knocked a couple more back.

Then on to a whirlwind tour of Covent Garden, including of course Neals Yard Dairy, and a bite to eat at Food For Thought. And then through Chinatown and off into the wilds of Kensington to have a browse through Whole Foods, which – after the high street outside, and Borough Market, and just about everywhere else in London – really wasn’t that crowded. Lots and lots of everything there, but we left relatively unscathed.