Cloudy with sunny periods and a chance of rain

Sunday was blustery and grey, with madmen sailing up and down the Thames all afternoon, as they were again today. 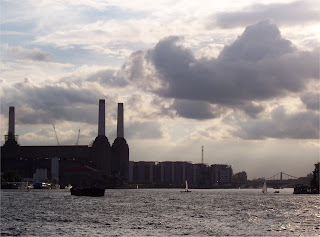 Later Sunday afternoon, I hopped a bus towards Mayfair and found a perch right at the front upstairs, my favourite place to sit even now I’m no longer a tourist. It gave me a great view of the wet windy streets as we sailed up Vauxhall Bridge Road, and then pulled up at Victoria station, where we paused. There seemed to be some cars stopped in front of us, and I watched a couple of them u-turn up a taxi lane and drive off; a fender-bender between the two in front, I supposed, until I saw the bare feet, the curled form of a young woman who must have been hit by a car just before we arrived. Given the absent-mindedness and trust of the pedestrians wandering around the station – not to mention the proliferation of iPods – it’s surprising there aren’t more incidents like this, or maybe they’re so common they don’t warrant a mention any more. It took 10 minutes or so until the police arrived, and we were diverted off on a different route with the sirens drawing closer. I’ll never know…

I got off at Hyde Park Corner and scurried beneath Park Lane to the Curzon Mayfair, one of London’s most comfortable cinemas, where it is possible to take a gin and tonic and box of popcorn into the show with you. We saw The Walker, which was a nice bit of mannered fluff, and my first movie in 10 months! –and then parked ourselves at a table in the Shepherd Market branch of Sofra, which was heaving with custom, to enjoy some lentil soup and delectable Turkish mezze, succinctly served on a snappy glass platter.

Monday morning I found my way to the offices of Sustain, a cheery band of food activists, representing about 100 different organisations, and squeezed into the select crew that makes up London Food Link. The building wasn’t easy to find, since in true London form, the street number I was looking for, 94, is not between numbers 95 and 93 as you might expect, but around a corner and slightly behind number 93. After a day crunching words for the delightfully named and highly readable quarterly newsletter, The Jellied Eel, I emerged from the bowels of the Underground to find there was at last a big chunk o’ blue opening up over London. 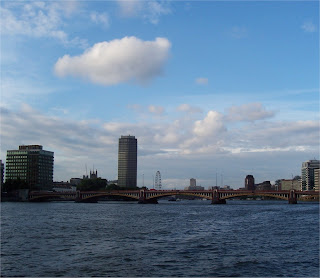