So, I’ve been two days in London, which has been grey, damp and deliciously cool. 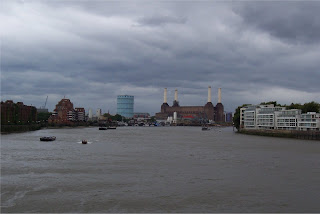 Leaving Parma scorching in its 32 degrees, I arrived to a 22 degree Friday afternoon and hopped the bus that all the Ryanair passengers were not taking because they’d bought the more expensive “cheaper than airport prices” bus tickets on a different service. So five of us enjoyed a roomy and peaceful ride through green countryside, occasionally lit dramatically by shafts of English sunlight, steered by Tony the driver who’d showed us two emergency exits to the bus and assured us we wouldn’t need them. Our route took us down Finchley Road, my old stomping grounds, and I was happy to see many landmarks still where I left them, on past the Wellington Hospital where I had my knee operation years and years ago, down Oxford Street, past Hyde Park looking lush and stately, and finally I was released into the modest zoo of Victoria Coach station. My host was waiting for me and after a quick drink and a tour of my new temporary home, departed for deepest Berkshire, generously leaving me an Evening Standard, a pint of milk and a loaf of bread to settle in with.

Saturday morning I did some larder-stocking. My first thought, as it often is when arriving in London, was for the dark aromatic coffee I buy from Markus Coffee, a little operation on Connaught Street that has valiantly, serenely and deservedly survived its proximity to a Starbuck’s that opened on Edgware Road seven or eight years ago. Walking there from the bus stop I crossed Connaught Square and passed parallel rows of traffic cones preventing parking in front of one of the homes (a pricey neighbourhood, this, where I imagine house prices vaulted the million pound mark a good decade ago); two other curious features about it suggested a story. One was the hand-written sign affixed to the wall, reading “No Reporters” and the other was a policeman cradling a machine gun and glaring at me as I passed; ditto his two colleagues who were pacing up and down the street. I wondered at first if it was a crime scene, but my friendly coffee dealer told me it was only the Blairs, who were not around much these days anyway. I picked up my package of heaven and wandered up Edgeware Road, wafting dark coffee fumes everwhere I went. A little preliminary shopping and a dolma stop at my favourite Lebanese grocery, The Green Valley, and I was headed back home.

Saturday afternoon brought a welcome last minute invitation to join Nancy and Mike at the How We Are: Photographing Britain exhibition at the Tate Britain. I was buffetted by grey winds on my way but got there to find a blue pixie dancing on the steps in welcome 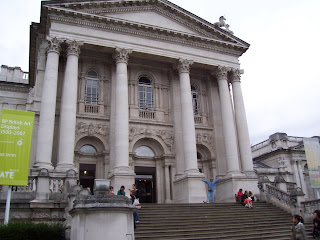 and we spent a happy, somewhat overwhelming couple of hours exploring British photography of all kinds by all sorts of photographers (Lewis Carroll, Julia Margaret Cameron, Martin Parr) from all points in photography’s history. There was even a visual explanation of where the term “blue print” comes from which was a bit of a revelation, as were three photographs of the Horn Dance of Abbott’s Bromley, ancestral home of my mother’s family. Afterwards we enjoyed a couple of pints and some fairly stale crisps in a nearby pub, blissfully smoke-free since the smoking ban came into force here last month. 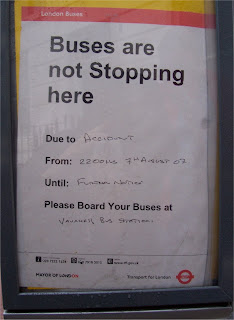 advising us that due to an accident on August 7, the stop was closed for as long as they jolly well said so. As the wind now had damp substance in it, we were disinclined to do as the sign suggested and walk over the bridge to the Vauxhall bus station, and while we were dithering, a bus pulled up, so we got on, victorious over signage. 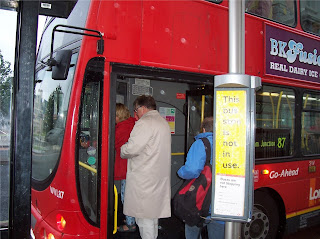 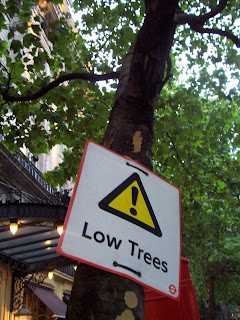 we made it to the Afghan Kitchen 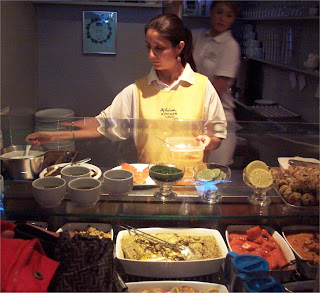 where we managed to come away with Lavand-e-Murgh (chicken in yogurt), Qurma -e- Gosht – kachalo (lamb with potatoes), Qurma Suzhi Gosht (lamb with spinach), Bajnon Borani (aubergines with yogurt) and Sarah’s (a vegetarian concoction of kidney beans, chick peas and potatoes in yogurt) and off we went to Cross Street where we cleaned the plates as best we could. Delicious welcome to London. 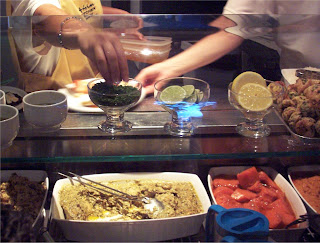