A partly lost week, thanks to a very special welcome home gift from the population of London from whom I have evidently been receiving toxic spores for the past seven days: something so special the Brits give it its own special name: I have a dreaded lurgy. Commonfolk might dismiss it as a cold, but it descended in the form of what I know from raw experience as the London Throat, a harsh and beastly ailment that quickly morphs into other unsociable symptoms – sneezing, hacking and snivelling – and inspires cravings for revolting cures such as Cold Powders and the vile green goo called Night Nurse.

I am, as well, equipped with a box of Sainsbury’s Ultrabalm Tissues, and a comforting leaflet written in typeface too small to read with the red, naked eye of the sufferer, which assures me I have made a wise purchase; these tissues are made from fibres farmed “from well-managed forests and controlled sources.” I would feel happier if the authors of this leaflet had felt able to use the words “sustainable” and “recycled”, but I am not sure they mean the same thing to all of us, and in any case I am dribbling pitifully and will use this box with apologies and contrition, not to mention pain and suffering.

So, feeling this sorry for myself, it was two days prone and unproductive, doing nothing more taxing than making toast and taramasalata, drinking pots of lemon & ginger tea, spooning canned mandarin segments into my insensible mouth, napping, and reading mysteries and thrillers of varying vintages (Peter Robinson to Robert Harris to Dorothy L. Sayers).

And so this morning dawned the third day, when the throat was subsiding and I had a brief illusory sense of well-being which drew me out into the brilliant and even seasonably warm sunshine shining down on London, 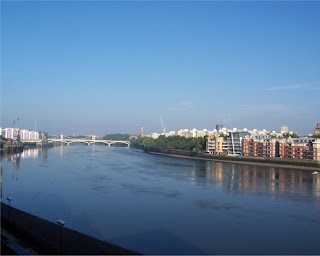 entering its charmingly named Late Summer Bank Holiday Weekend. I went on an errand of mercy (mine) to the Oxfam bookshop in Turnham Green, where I found three treasures: Not On The Label by Felicity Lawrence; Kitchen Essays by Agnes Jekyll (a beautiful re-issue from Persephone Books); and Headlong by Michael Frayn. After a restful afternoon sipping watercress soup with the ever entertaining and delightful Meli in the sunny, flower-lined courtyard of Carvosso’s Wine Bar and Eating House, and a stroll and people-watching interval on Acton Green, I returned to another bowl of mandarin slices and a nice shot of Night Nurse which should find me rested and recovered by morning. Or so I can hope.

Some relaxed West Londoners, well out of the sun of course, having that pasty English skin, but happy to see it from the shade. 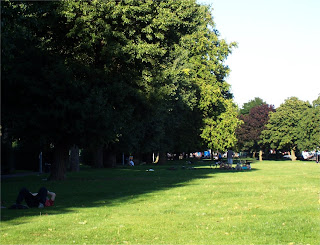 By dusk, the party ships come out to play… 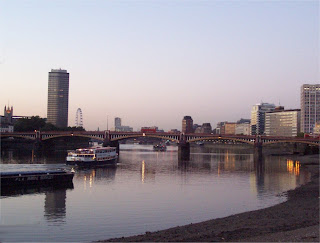 And as night falls, a dinner ship sails into a perfect London sunset. 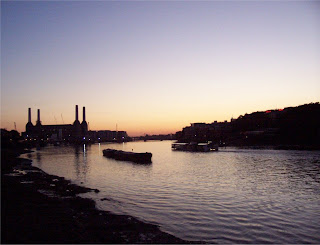