So here we are in France. We arrived on Sunday morning, in Lyon, and I for one am rejoicing in the cooler temperatures – Parma was a steamy 35 degrees when we left. We’ve had our customary stage weather – chilly and drizzly with a bit of sun thrown in.

We had a free night in Lyon and headed for Le Nord, one of the Bocuse brasseries, on the expert recommendation of a local (thanks Jeremy). An excellent salad of green beans, artichoke hearts and a silky slab of foie gras de canard, followed by a wholesome waffle with sides of applesauce, warm chocolate and cream. Pas mal, and a good entree to France. Monday we were up with the birds and off to Bourg-en-Bresse where we met our new friends Philippe Marchenay and Laurence Bérard, researchers in food and bio-ethnology, who talked to us about geographical designations and biodiversity in French food products.

Our first example was Charolais beef, plodding towards AOC/PDO designtion and so widely known already that they have their own museum at la Maison du Charolais, where we had a talk and a tasting. 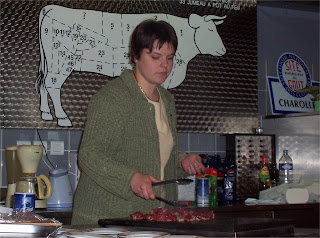 Then onto the bus and off at a Charolais farm. 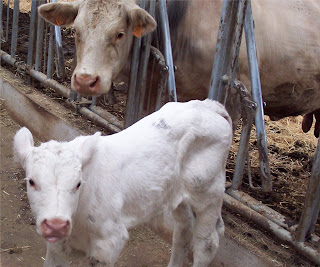 Dominique Gateau, the owner, talked to us about his breeding practices, which involve 24 hour video surveillance during calving, which lasts from January till June. We met a few of the newcomers and were shown some of the qualities that make good beef cattle. 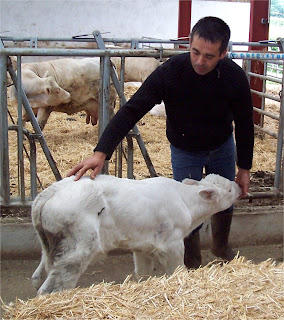 Afterwards, he set up a little wine and cheese party on some hay bales, featuring of his own goat and cow cheese. 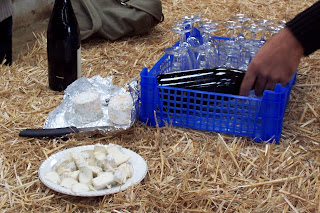 And then back to le Maison du Charolais where they also have a restaurant, and we had a Charolais steak before heading off into the night.

Tuesday morning we ambled across the street to Lyon’s excellent food market, les Halles de Lyon, where Philippe and Laurence guided us through the stalls. 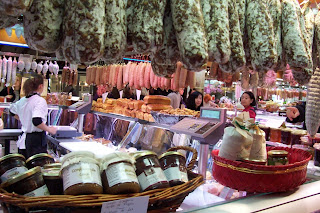 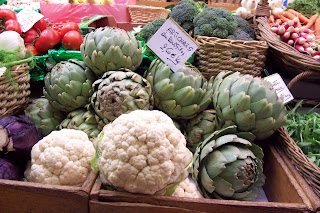 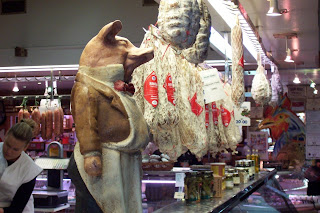 We fetched up at a great cheese stand and bought plenty for lunch which we enjoyed in Philippe and Laurence’s comfortable house in the country. 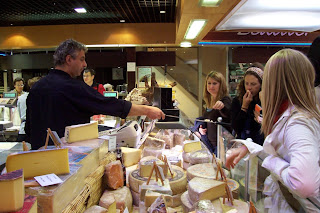 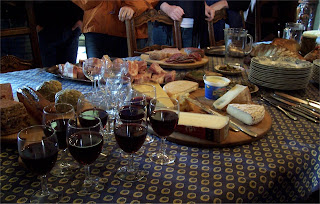 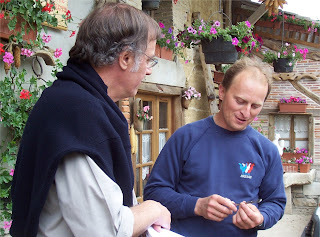 Then to the Bresse Chicken farm owned by Christophe Vuillot, who, at 37, thanks to skills at poultry farming learned from his grandfathers, has a happy life raising his happy chickens who fill the fields around his house, with a small flock of guinea fowl and a grey border collie keeping an eye on them. The birds are long maturing, fed on a mixture of special poultry feed and what they forage in the grasses, and they are given a helping of whey in their feed which works as a natural preventative against worms and parasites. They are also, of course, healthy enough that they don’t need the chronic antibiotics that battery farmed chickens do. 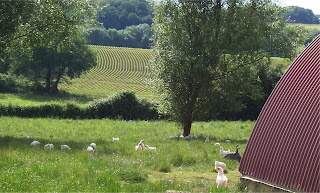 We were given a demonstration of the dressing of these very special and very expensive chickens, which are slaughtered on the farm, their head and neck feathers left on (for aesthetic purposes, the farmer explained) and then sewn into a linen casing that expels air and acts as a secure protection for up to a week. The chickens are prepared this way for competitions and feast day – 150 of them are hand sewn each Christmas at this farm alone. 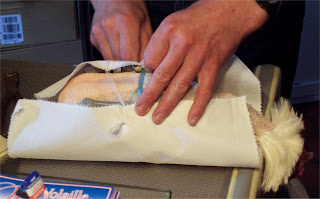 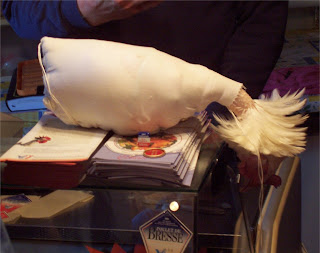 And for supper, we had… chicken. 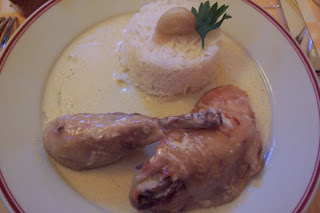