Wednesday was mustard day. We left Lyon and stopped for a couple of hours’ free ramble round Beaune, looking pretty in the sunshine. The wine museum beckoned a couple of us, and we learned many things, including the six different ways one can drive a vine stake into the ground. Who knew??

After lunch we all trooped into the Fallot mustard mill, which still makes its mustard in the traditional way, using stone grinding. We were surprised to hear that 98% of the mustard seed used in French mustard, including Dijon (which is not a geographical designation, so it can be made anywhere). The Fallot mill makes a Burgundy mustard which has nearly achieved its AOC designation, and which uses only locally grown mustard seed, some of that elusive 2%.

After a tour of the interactive museum and a small tasting, we headed off to Dijon, where we dined near the market at Au Bon Pantagruel on some duck in armagnac sauce that did not linger quite long enough in the pan for most, and had to be wrestled onto the fork, followed by a chocolate mousse that left us wanting, well, a better chocolate mousse. 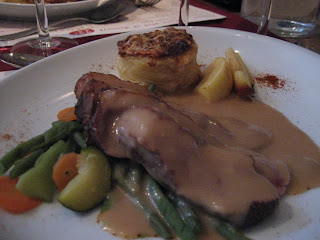 It’s entirely possible one can have a much better meal there if there are not 25 of you with a block dinner order. Let us hope. 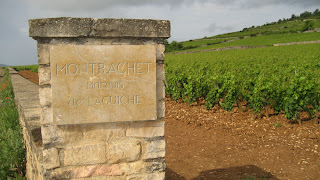 Thursday we went to Volnay, to visit the Chateau de Puligny, where Etienne de Montille took us out to the fields to show us the terroir. His fields are organic, without irrigation, and he looked rather pleased when he said he couldn’t show us any unhealthy plants because they were all doing so well. 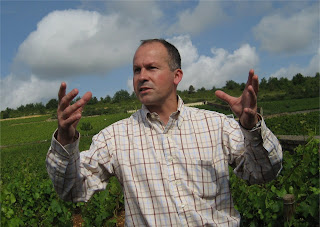 We tasted a small and delightful selection before departing to la Ferme des Levees in Lusigny-sur-Ouche. 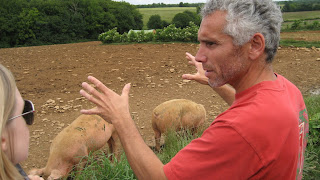 Born again pig farmer Jacques Volatier told us he’d given up life as an engineer and town planner in order to do something more socially useful, environmentally sound, and agricultural, serving a local market – in protest against the industrialization of food production and long-haul food transportation. So, he raises pigs year round, outside, without antibiotics, and produces pork products on the farm. He doesn’t breed the pigs himself because that would require conformity with EU hygiene regulations which are so strict (like making the farm a war zone, he remarked) they would make it impossible for him to do what he needs to do, which is to show the people who buy his pork where it comes from. 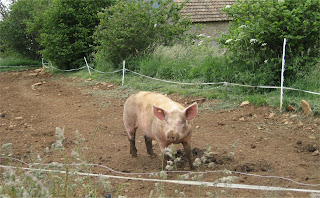 It’s a small scale enterprise, in which he slaughters about three pigs a week, and sells the meat and products at markets and from the farm shop. 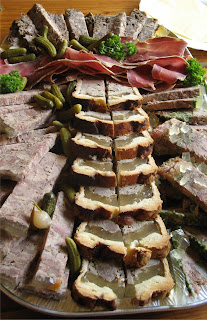 We sampled some jambon persille, jambon a la moutarde, pates en croute, gratons, salad and some home made elderflower cordial (he planted the elderflower as shade for the pigs, and began turning it into a saleable product as a sideline), followed by fromage blanc, a bit like cream cheese, from a farmer up the road, served with thick spooning cream and sugar or salt. Kind of like a do it yourself cheesecake, someone remarked. 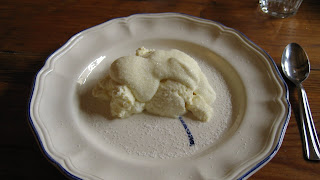 And off we went to another vineyard, this time the Domaine Dujac, where as we dodged spitting rain and thunder, Jeremy Seysses told us about his vines and wines. 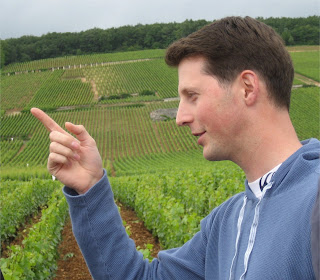 We had a spin round the cave and then he gave us a horizontal tasting of 2001 wines, chardonnay and pinot noir, followed by a special and delectable glass of 1976 pinot. 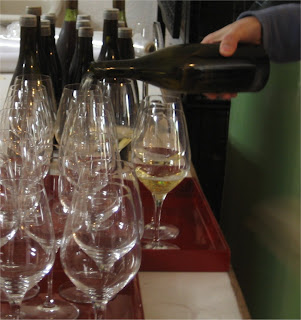 Thursday night was another free meal, and after a drizzly walk seeing the sights of Dijon, we ended up nearly back at the hotel with our noses pressed to the menu board of Allo Nem, an Asian restaurant – when, like magic, our Taiwanese food guru Andy popped his head out the door and said the magic words: “it’s good!” And he was right.