The week has been largely social, beginning with my return from London on Monday. Tuesday we arrived in Colorno to find the morning class cancelled, so filled the time with a British and Irish cheese tasting – Berkswell, Caerphilly, Double Gloucester, Durrus, Stilton, Swaledale and even a little Vignotte, just because, well why not, we’re off to France this weekend. I’d brought some Dunkerton’s Cider to wash things down, and some oat cakes and digestives and Cornish wafers.

A big party on Tuesday night, which started with a rooftop aperitivo party – passing through a nicely decorated laundry line – here it is with Jess the artiste: 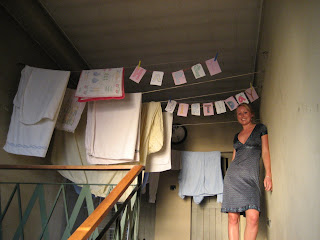 and on to an al fresco dinner at the Santa Chiara Trattoria, which featured traditional starters including torta fritta with culatello and prosciutto, and a parmesan torte drizzled with balsamico. 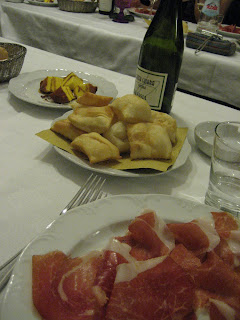 I was indulged in my year-long project to try every Barbera wine I can find (and this one was lovely). Then had a nice bit of duck followed by a fruit tart, as well as toasts and songs in many languages. 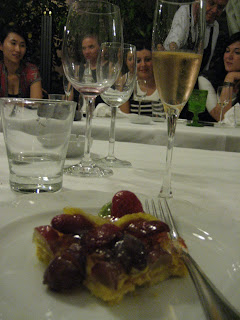 Next, I was blessed by visiting Canadians, although the difficulties of arranging a nice time became somewhat operatic in everything except musical elegance.

The day of departure the Parma B&B, found online and booked a couple of weeks earlier, cancelled my friends’ stay… I guess on the positive side at least they actually let them know they were pulling the rug before arrival, but it was nearly impossible to arrange a room at such short notice, and so instead of a charming centrally located abode, they ended up in an airport hotel with a higher than expected taxi bill and no place to eat except the hotel restaurant. Not much of a welcome to Parma. (If anyone wants the name of that b&b in the interests of avoiding them in future, get in touch.)

After that, Geoff’s plane from Canada was caught up in a strike and his connection to Milan was cancelled so he had a bonding experience with some similarly afflicted fellow travellers in their circuitous route through Geneva and onwards by train, while his lovely wife kept vigil in the Milan train station all day.

The whole week has been a kind of precis of what can go wrong here when you try to make plans.

I had tried to book a restaurant for the supper I thought we’d have together in Parma on arrival night, but the one I tried had, according to its website, closing days of Tuesdays and Wednesday lunchtime. I tried to phone but the phone was on fax. I tried emailing a reservation, but didn’t hold out much hope for a reply, so I stopped by Wednesday evening but the place was shuttered with no indication of opening times posted on the door. So I gave up. Luckily, as it turned out.

I then attempted to book a rental car, and thought I’d try to support local businesses by booking locally. After my opening remarks and my first “scusi?” to the voluminous reply, the helping hand at Maggiore used it to put the phone down on me. I gave up and went to Hertz, booked online and hey presto.

I also attempted to book an agriturismo we’d found online, which had nice pictures of its room but no room rates posted. So I tried emailing them (in pidgin Italian) to ask about room rates, but there was no reply, so I had a more fluent friend call on my behalf (grazie Corrie) and succeeded in landing the rooms. Which turned out to be first rate and we had a perfect stay at the gorgeous and welcoming Campo del Pillo. The owner was friendly and generous; when he saw us tucking into an al fresco antipasti of Pecorino Sardo and wild boar salame, he sniffed manfully and returned moments later with some 30 month old parmigiano-reggiano, drizzled with 35 year old balsamico, and accompanied by organic salame and spalla cruda. 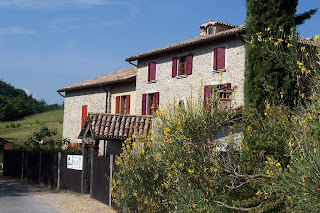 A bella vista out the windows: 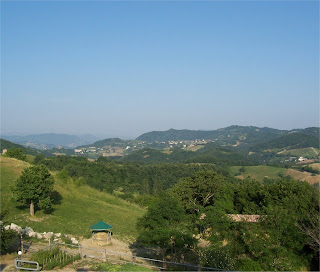 And the old grey mare… 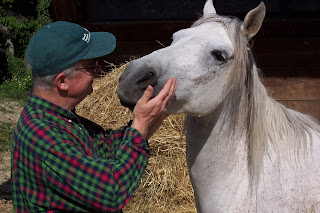 Next on the agenda was attempting to book dinner at a Slow Food recommended restaurant, Il Capolinea. After numerous attempts over two days with failed phone connections, I finally got through. After my opening remarks, the other end hung up on me. Let’s say the sound quality was bad. In any case, I phoned back, and this time he heard me out and took my booking.

And we had a fantastic meal in very friendly and capable hands; a mixed starter of pork salad (insalatina di maiale), vegetable frittata, pickled onions, salame and culatello, 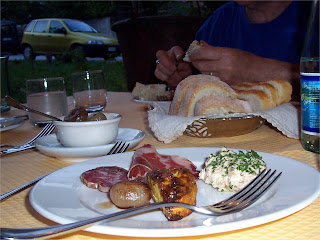 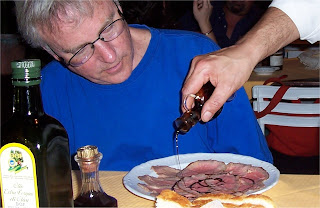 accompanied by a comfortable selection of vegetables, followed by four star desserts: stunningly good fresh strawberries with gelato and balsamico; and chocolate mousse so good I wanted to lick the plate. Afterwards we made friends with a neighbouring table and were rewarded with a glass of nocino; and after that the proprietor brought us some beautiful dessert wine and exquisite almond macaroons. 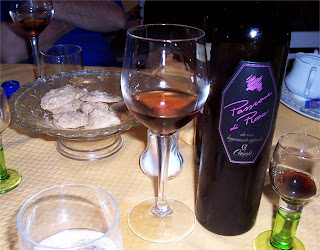 Awesome. We discovered later that Castelnovo ne’ Monti is in fact a Slow City, so we were destined for a good meal no matter what, but I think we struck it lucky nonetheless. Scenic place, with its characteristic tabletop mountain, La Pietra di Bismantova, which is said to have inspired Dante’s Monte del Purgatorio. 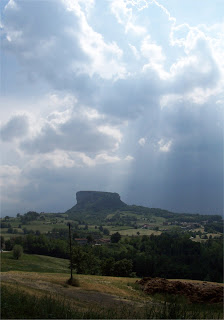 We also discovered that the town is known as the City of Bells because of a long-standing bell foundry (Capanni Bells) where they’ve been ringing the changes since 1500. 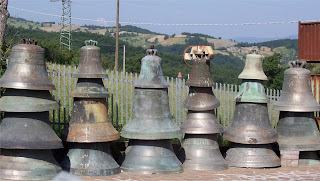 On the way home today we paid a visit to the Museo del Sughero (cork museum) in the pretty Appenine spa town of Cervarezza Terme. 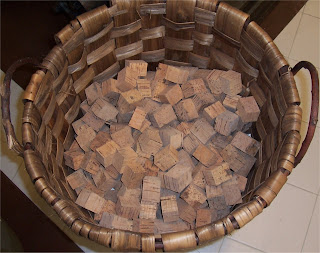 3 Responses to Visitations and celebrations