Where does all the garbage go?

I learned the important connection between food and sewage years ago when I came across the excellent documentary Crapshoot: The Gamble with Our Wastes. The film of course talked also about garbage disposal and the endless growth of landfill waste which humans create so easily and dispose of so badly.

So I was pleased to finally be able to catch a Hartland Landfill tour, which I’d heard was well worth taking. So much has already been written and said about the growth of food waste in well-fed nations I won’t belabour the point here; but just to say it seems we are not willing or able to manage the food we buy, grow or manufacture, and despite composting pick-up systems now in place, too much of it still finds its way to places like Hartland, where it generates greenhouse gases.

So one of the features that most intrigued me was the methane capture system – basically a series of pipes laid into and across the ever growing garbage mountain, feeding into an electricity plant – which powers (so far) about 1600 homes in the area, with plans for expansion. However, as long as food waste – the primary source of this methane – can be diverted into composting programs, the growth will slow. 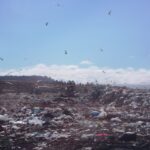 Our tour bus spent time sitting at the top of the current garbage mountain, so we could watch birds scavenging and scattering. Our guide told us that birds of prey (from the Cowichan Raptor Centre) come to keep order later in the year, and this program of Natural Predation is by far the most effective preventive measure they have found. The birds who feed on our garbage end up the worse for it because of consuming microplastics and toxins. 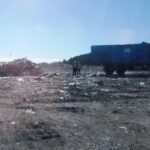 I was also encouraged to see inspectors checking each load that was deposited by garbage trucks. Because space is limited by planetary constraints, our municipalities have strict guidelines about garbage vs recyclables and compostables; the guidelines are enforced through fining the trucks that pick up our bins. A 2016 study of Hartland found that organics, paper and plastics made up half of what is thrown away by locals; hence our blue and green bin pick-up programs.

Even so, unless consumers and businesses change their ways by reducing their annual waste load of 400kg/person to 125kg, Hartland expects to run out of space by 2045. At this point the waste will be destined to take over some of the local hiking and bike trails on a neighbouring mountain.

Adjoining the current mountain is a new valley being excavated ready to fill; in the background are sea, sky and mountains. And here’s what the power station looks like. There’s a nearby leachate pond as well, which is toxic fluid runoff, contaminated by 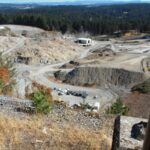 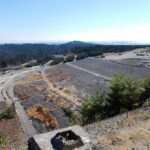 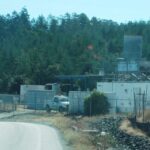 The landfill site is also a busy recycling centre, trying to reclaim as much as possible from consumer waste – people can bring in plastics, metal, clothing, paint etc to a public drop-off area, and the centre distributes and sorts it for whatever further life it might have. There’s composting available for larger scale drops, for a fee.

Here’s a closing thought: one of the items that has been deemed not recyclable is a damaged blue box!