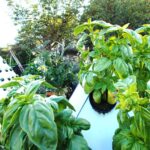 For the first time in a long while I went on a farm tour of sorts last Thursday. This one was a tour of an aeroponics project run by Harvest and Share Food Relief Society. It’s housed on the grounds of Victoria’s Government House, next to its vegetable garden and Victory Over COVID Garden.

While I am not generally a big fan of artificial growing media (more on that shortly) this one was set up with the worthwhile goal to provide fresh greens to local food banks and community kitchens during the summer growing season. Currently they’re growing basil, baby romaine and tiny grape tomatoes.

The setup involves aluminum pyramids with planting holes spaced 6 inches apart; each of the 25 planters can hold 136 plants. The plants are started in peat plugs, set into small plastic baskets that fit the planting holes. Foam (styrofoam) is often used in such systems, but can’t be cleaned or easily recycled. The system is lightweight and planters can be tipped up or moved to allow maintenance of the spray nutrient system that feeds them. 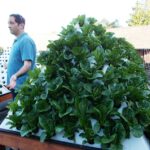 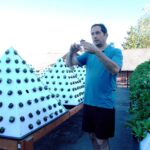 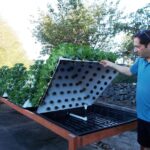 Plants seen from below

The plant roots extend into the growing space where they are misted with a liquid nutrient running through a pipe system beneath the planters, set on timers and propelled with a pump system. The excess liquid runs back into a collection bin where it is filtered and recycled. The nutrient liquid is changed at regular intervals, and the misting system needs checking and cleaning as it can get clogged.

Like many food growing innovations, some of the preliminary research into this method of food production came from the cannabis industry (Michael Pollen remarks on cannabis-grower-inspired horticultural innovation in Botany of Desire) 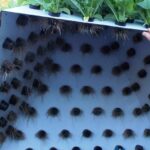 Plant roots within the pyramid 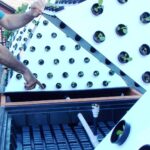 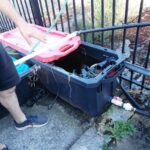 The original design of this system was set up for growing basil; plants with larger leafy systems need to be spaced more widely. For example, the planters do work well with potatoes, which will extend inside the pyramid with the leafy matter above, but the plants need to be spaced more widely and/or positioned where their bushy leaves don’t intrude on what else is growing in the same planter. Other plants have been tried, including broccoli and squash, but speed and quantity are the goals in the current setup.

Hopes for the future are to extend the growing season by building a greenhouse (the system is located on the cement pad once used for the greenhouse that served the Government House kitchen).

There are compromises in every agricultural method. Aeroponics is admired for its clean, water-conserving and productive features and small footprint. The nutrients in the foods grown are believed to be similar to those in soil-based methods, although of course it depends which nutrient mix, which growing conditions, and which soil you are talking about.

However, held to a sustainability lens, this particular system does depend on peat plugs, plastic pots, plastic piping and electricity to run; and relies on an imported liquid nutrient mix. So it will never be free of external inputs as a soil-based farm can be. Done on a large scale, it can take farmland out of production and damage the health of the soil beneath its operations as readily as any other human activity. Moved indoors / into a greenhouse, additional requirements include heating and dehumidification systems = more electricity.

Growing without soil means that humans must attempt to mimic nature in providing the nutrients for plant growth; our species has determined there are 17 (or maybe 18) essential plant nutrients, but in the soil of course there are far more micronutrients, as well as microbial helpers working synergistically to nourish plants and build soil, adapted to different soil and climactic conditions. To my mind, there are as well question marks around the source (sustainability) of the ingredients in the nutrient mix, as well as the risk of diseases that can be swiftly circulated through a closed system.