Unhampered hampering and a cold poem

I spent today at Joyce & Peter’s annual hamper-stuffing party, held at their beautiful B&B/home, Earle Clarke House. The event, which the couple has been hosting since they first began the parties in Toronto in 1995, invites anyone who cares to come along with some part of a Christmas meal – frozen turkey, fresh vegetables, Christmas pudding and the like – to join in assembling these into hampers donated to needy families around Victoria. It begins around noon with stacks of empty hampers and an air of calm organization 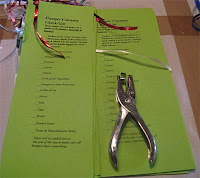 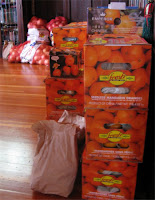 But before long the place is thronged with workers, who settle in to sort the contents 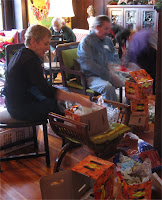 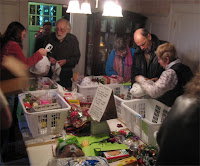 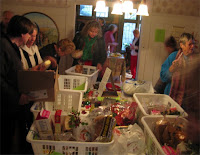 and by 3pm the long stairway had filled with Christmas hampers, waterproofed against the constant drizzle (better than last year’s surprise snowfall) 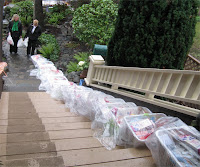 which the Salvation Army will have picked up this evening. By the time I left at around 4pm with the assembly line working at full steam, the hampers were all the way down the stairs

and around the corner.

The number of promised turkeys which had begun at 81 – already breaking last year’s record-breaking count (78) had been bolstered through the afternoon, and the stack of bins to put them in was shrinking. We’ll hear the final count soon I’m sure.

I wasn’t one of the 86 poets who built last year’s communal poem at Leaf Press, but I might chip in on this year’s. Check it out and sharpen your pencils: they’re accepting couplets (no rhyme required) till the end of December:

“We invite you to send couplets — what’s it really like out there on the streets/fields/forests … or in those unprepared homes during this time of high fuel prices? The working title: “Cold”. “