Like anyone with that ominous birthday on the horizon, I’d say the Writers Union of Canada approaches its fortieth (2012) with a year-before do in Toronto that combines about the right mix of congeniality, information overload, anxiety and a drop or a bite too much to drink or eat.

Today was the day of workshops, also known of the day of impossible choices. The sessions were recorded, so it should be possible to catch up later with what I missed. We had the relative novelty of a book table this year 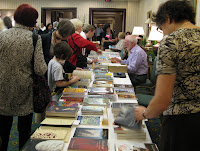 for the first time in several years. It seems to be going well.

The Public Lending Right session offered some ominous rumblings about the fate of this 25 year old institution that’s put a few bucks in the pockets of Canadian writers whose books are in the holdings of Canadian libraries. It’s at risk now because of digital publishing – which could drain the system dry if it tries to compensate authors of with new or repurposed electronic titles (not currently included) at a time when PLR funds have already ebbed away to half the per capita amounts enjoyed 25 years ago, due to lack of new moneys to meet the influx of new print titles to the funding pool. Though its cheques are shrinking, they’re incredibly valuable to writers living on marginal incomes; but its future, like other federal spending initiatives, could well be at risk with promised funding cuts coming from a government whose commitment to culture is, shall we say, unclear. And the whole digital rights question is, in the words of panelist Michael Elcock, the “kind of thing that turns your brain to porridge”.

We replenished ours with a break and then returned to porridge country in the New Gatekeepers session, which was more about epublishing and emarketing. Much of the discussion batted around the relevance of publishers (which pay about 10% in conventional royalties, or if you’re lucky some 25% in erights) versus self-publishing or self-representation through the likes of Kobo or Smashwords (where you’d get as much as 70% – but potentially then have to shell out for the kinds of services publishers usually handle: editorial and marketing and administrative). Mention was made of interesting innovations like Cellstories, which publishes short fiction, or Kickstarter, which allows artists to pitch ideas and raise money to carry their projects out; and publisher ECW was there talking about its digital arm, Joyland, which takes only erights, leaving writers free to seek out print publishers separately (or not at all) and is looking into subscription publishing which would allow it to publish up to three such titles a year.

Thus boggled, we briefly emerged to lunch on bi-bim-bap and returned to hear about The New Realities of Book Publishing, which were – you guessed it – largely about epublishing and emarketing. One independent bookseller held out against the flow of chat about blogging and tweeting and social networking to argue that there was still a place for a good bookstore owned and staffed by people who read and love books and can serve customers who do likewise. In support of this, one of the few under-forties writers at the meeting -a teacher – described bibliomania days where her grade 5 and 6 students wore pyjamas to school and lay around reading books all day – a wildly popular program!

Some seriously calorific treats helped us leap the mid-afternoon slump and make it through The Writer as Promoter (Or, Who Has Time to Write) (or, as a panelist quipped, Shouldn’t My Publisher Be Doing This). Wherein there was more chat about blogging and tweeting and social networks. Cassandra Sadek, the director of online marketing for Random House, said that publishers should be guiding authors in building their online presence, and using that to allow readers to be their “brand ambassadors”. Author Cathy Marie Buchanan features a little tutorial about skyping on her website so that she can use it to speak virtually to book club meetings, and also gives live chats on GoodReads (a good place for fiction writers, apparently). Resident curmudgeon Russell Smith was left to object to the idea of thinking like a marketer which he said would mean commoditizing one’s own writing and aiming it to please a target audience rather than writing for writing’s sake: “I also don’t like the idea of “brand”” he said: “I don’t want ‘brand ambassadors for a product’ I want ‘readers for my novel’.”

Then after a swift round of regional meetings it was time to forage for supper. The Pilot pub 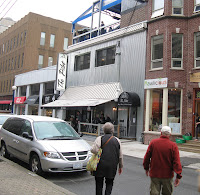 may have literary cred, but it was full and noisy on a Friday night so we opted for the quieter confines of the Coffee Mill, which Myrna says is a long-lived Hungarian restaurant, which offered a fair spinach pie 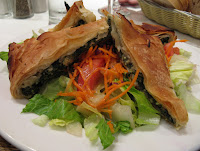 that fueled me for the Margaret Laurence Lecture, introduced by outgoing union chair Alan Cumyn 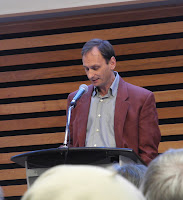 in which Graeme Gibson 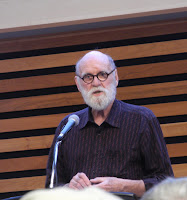 spoke on A Writer’s Life. It was an entertaining tour through his travels in Europe and his beginnings as a novelist, which were as bumbling as any, but distinguished by dedication that still sees him writing some 40 years after his first novel was published. He was also one of the founders of the union, so a description of its humble beginnings rounded out his talk.

And more there will be tomorrow.