Managed to fit a flying visit to the Wychwood BarnsFarmers Market in before the Writers Union meeting plenary on Saturday. It opens at 8 for the summer season. Another misty morning

but enough vendors and a steady stream of custom that showed it to be a healthy neighbourhood market. Lots of variety: local honey, wool, assorted wild foods from around the country – including maple syrup, dried wild mushrooms (from BC), saskatoons (from Saskatchewan), wild rice, ocal fresh ramps (wild leeks) 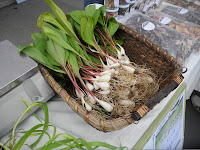 and exotic pickles (like spruce tips and cattail hearts). And produce of course, including some spectacular Ontario apples, 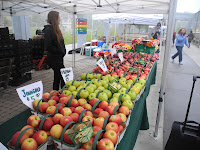 sweet potatoes (I think he said the variety was Bordeaux, not the Georgia Jet I’m growing in 5 gallon pails this year), 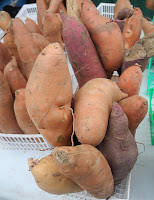 and some fine vegetables 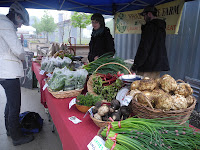 including a couple of beautiful winter roots, both of which I’ll be planting again this year myself: 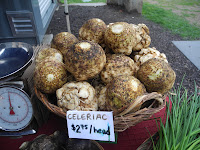 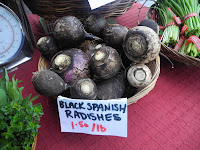 It’s a well organized market, which operates year round thanks to the shelter of the barns. There’s a sensible scheme for the bakers, which keeps them well under cover while the other vendors are under tents:

Then I sprinted off to catch a streetcar and a subway and settle in to a good day’s politicking with the writers. Copyright was the most active topic. Passion on both sides of the discussion, which had to do with the manner in which copyright fees are distributed to creative artists. It could have been a long-winded and ugly discussion, but chair Alan Cumyn managed to guide the concise and respectful speakers through to the vote with a firm and friendly hand. It was a great meeting, after which the writers passed a couple of free hours gearing up for the banquet and short readings and presentation of the Danuta Gleed award (to Billie Livingston for Greedy Little Eyes). And then it was time for 3 Chord Johnny

to bring it on home: great stuff, not least because the musicians are all writers. We danced our feets off and then were regaled for an hour or so by a rogue fire alarm which attracted a swarm of fire engines and slowed the ascent to the after party.

Today’s meeting, in which the gavel was handed over to incoming chair Greg Hollingshead,

was a peaceable wrap-up with elections and farewells.. until next year in Vancouver.