We were in the company of about 150 others last night, at the Harvey Stevenson Southam lecture given by Ojibwa story-teller Richard Wagamese. 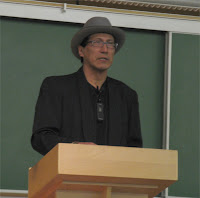 Invoking the likes of CS Lewis and Norval Morrisseau, Wagamese spoke on the roles of stories in self-actualization; affirming childhood’s freedom with narrative; community building; and even the building of garden sheds. Demonstrating with a few stories of his own, and framing the talk with an Ojibwa story about the bringing of light into the world by a spider (which is also the story behind dream-catchers) he spoke to an attentive audience, mostly white, partially students. Wagamese is one who embraces contemporary tools – Facebook, Twitter, blog – unapologetically (“I welcome all those who are friends I don’t know..”). I confess my favourite lessons were those of Lewis (You don’t have a soul. You are a Soul. You have a body.) and Morriseau (who urged Wagamese to tell the story for the story’s sake). Perhaps that only affirms the role of the story teller as sharer of wider wisdoms.