A nice campus to visit is Virtual University. Cheap (US$20 for up to 4) classes and one useful freebie that’s already underway this week: How to Prevent Identity Theft and Online Fraud. They have courses in PaintShopPro for anyone that has this cheaper-than-Photoshop application, and some writing classes (but no poetry, at least not this time).

I happened upon a leaflet promoting the Urban Farm Market and Urban Feast Stage which are being offered (free!) as part of Open Air 2006 right through till September. Upcoming on July 23 is featured chef Christopher Moore of the Union Club, July 30: Rick Choy from Hotel Grand Pacific; August 6: Mike Upward, James Bay Inn; August 13: Patrick & Christabele Simpson, The Marriott Inner Harbour. I fear I might be turning into a food demo junkie…

Fresh fruit abounds. I weakened at the sight of a flat of raspberries at the Red Barn Market last week and brought them home to my freezer. I have a couple of good recipes already. I tried the very tasty Gâteau au Yaourt à la Framboise from a wonderful blog, Chocolate & Zucchini which Bonnie sent me a while ago. At that point I was a little short on raspberries so I used half blueberries and it worked well. I’m going to try her blueberry coffee cake recipe next.

From the Lighthearted Cookbook, I have long been a fan of Raspberry-Yogurt Küchen, which has a shortbread base and berries smothered in a baked creamy yogurt topping: particularly nice I think if you make it ahead and served chilled. This time I substituted mostly loganberries, which seemed to me to lack a little zip. Here’s a slightly amended version (I no longer own the cookbook so I’m not sure where I deviated):

Peace reigns, most of the time, in the foster animal kingdom: 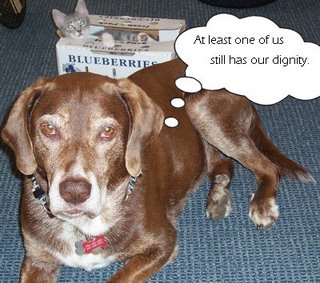