Appalled to see that a salmonella outbreak in the UK was traced to Cadbury’s chocolate bars! But relieved to see that the source was not the chocolate but the crumb base. So purists can rest easy and carry on with that therapeutic intake.

Yesterday I found the perfect activity for the first gentle day of our heat wave: a visit to Merridale Cidery. We did the self-guided tour to see where and how the cider was made, admired the acres of apple trees and then enjoyed a small tasting of half a dozen of their products. Apple juice was thoughtfully provided for our under-age companion, who was at an age to enjoy the faerie fixtures that were strategically placed to help her endure the tour.

Scrumpy and Traditional Cider were my favourites. In West Country dialect, “scrump” meant to steal apples, and so Scrumpy was the name for pilfered apple cider. At 11% alcohol it was described as a “sit down” cider, and mercifully Merridale has departed from the traditional recipe which calls for raw pork as one of the ingredients. 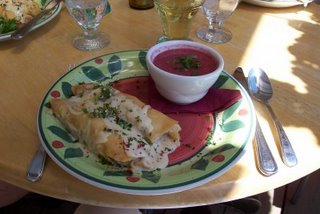 Merridale puts on a mean spread in La Pommeraie Bistro, where we sat outside on the covered veranda and admired the orchard. I had some very nice pulled pork and apple crepes and the soup of the day, a cold honeydew-raspberry concoction which the waitress accurately described as “a smoothie without all the sugar”. It was garnished with chopped mint and gently flavoured with dill and was just the thing for a warm summer day.

The perfect surprise for this melting heat we’re facing was the arrival of my copy of Loutro Poems, an anthology of poetry by writers who attended World Spirit poetry courses 200-2005, lavishly illustrated with colour photos. As if I could forget…

0 Responses to Is nothing safe?