Poetry and a pox on technology

Last weekend I participated in one of the many launches planned for Rocksalt, a new anthology of BC poets. The event I went to was in Nanaimo at the new public library which is large and beautiful but didn’t have quite enough seats for all the people who crammed in the foyer to see the 17 poets reading. The 108 poets featured in the anthology include, sadly for me, a Rhona (yay!), a Rhoda and a Rhonda. I think the sheer number or poets reflects the retirement and pre-retirement patterns for poets in Canada…

Harold Rhenisch, one of the editors, 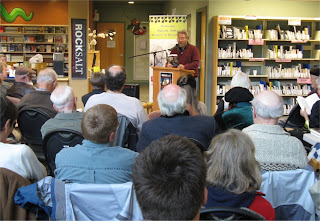 Mona Fertig, the other editor and publisher 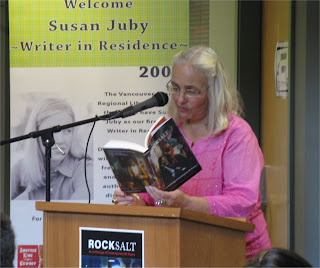 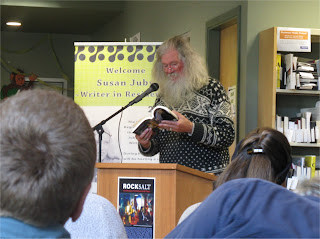 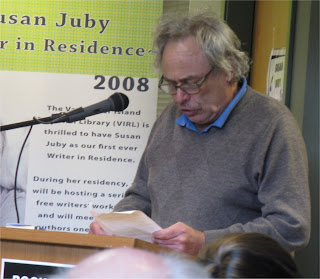 and my publisher, Ron Smith: 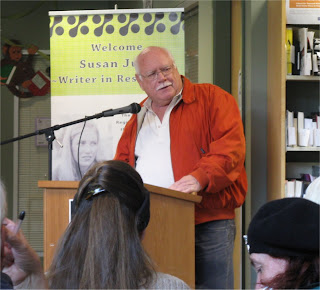 Meanwhile, working through my list of things to do, I had sent a post-six month query to a Canadian literary magazine I’d sent poems to back in the spring. Because the journal publishes an email address, I thought for purposes of a follow-up I’d email rather than send a letter, but my message bounced in seconds. I was feeling persistent, and rather fed up with technology that works against communication rather than for it, so I printed off the email and the bounce message and stuck it into an envelope with a suggestion the magazine check with its IT department, as things had reached a sorry state when a legitimate enquiry was being dumped as spam. Here’s the reply I got from someone (not an IT guy) at the magazine:

We haven’t received any other complaints about blocked emails (and we receive hundreds of emails a week). I suggest that the problem is on your end. You should run a full system scan on your computer. We have a Spam filter on our computer, but it does not block Spam, it only identifies it as such and lets it through. In other words, your email is being identified as malicious, not simply as Spam.

I guess unhelpfulness is not the exclusive domain of profit-oriented company employees. How could you know for sure you “haven’t received any other complaints about blocked emails” when those complaints can’t actually get through?

For that matter, how many of us even have the energy and persistence to lodge complaints about all the things that don’t work right in this indifferent and alienating world? It’s tiring! Even here in supposedly customer-friendly Canada it’s taken me all week – 3 failed phone calls and 4 email messages – to get my phone bill sent to me.

But out of control spam blocking has been on my mind a lot lately. It happened that in my attempts to arrange a poetry reading with another Canadian college this summer, my messages were sent to the Spam folders of two different organisers. When I hear about these things, I always suggest to the recipients that they contact their IT department, but I don’t know if they do. I think I might have to go back to using paper and stamps.