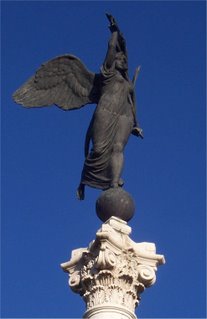 Monomento alla Vittoria (Victory) in Parma – unveiled in 1931 and made out of enemy weapons.

A long weekend in Parma: we had a holiday on Friday (Immaculate Conception) which I squandered on a day of rest and rehabilitation, trying to beat the bug that has been making life tiring and difficult. I hope that’s done the trick.

We had sunny days Saturday and Sunday and I spent the daylight hours of the former running errands at Brico and Ipercoop. A typical expat’s shopping expedition. Nancy has already written a poem of the wrong lightbulb, but at least she got to experience that in English. Yesterday I bought a lampada but managed to come home with the wrong lampadina – and no illustrated guidance on which is the right one. All those I’ve seen in corner shops have been standard screw-in types and this is obviously something else. Two other minor purchases went similarly awry – wrong battery, wrong size hook – and so it goes. Swimming through the murk.

Had a chance to commiserate with a few classmates over dinner. We compared notes: where can you buy a hammer? Who sells lightbulbs? Why do the service staff of Telecom Italia simply hang up when they hear an American voice? What’s the best way to get hold of the one cab that goes from Colorno to Parma at night? What’s the best way to learn Italian? What do they sell in the Chinese market? It was a convivial and delicious evening with almost as many things to eat as questions to ask. 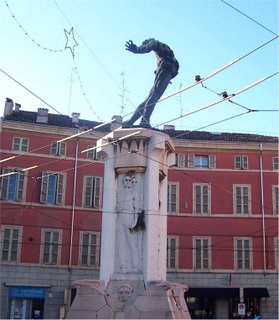 Today I set off in hopeful fashion to replenish our water supply – bottles of drinking water we prefer over the heavily mineralised tap water that to our sensitive noses says ‘eau de sulfur’. All right to bathe in (apparently this is sulfur spa country so we’re not imagining it) but we prefer something less overt in our coffee. But I managed to miss the supermarket by about 10 minutes; it was closing early today due to the holiday I guess. There was instead a Christmas market to browse, and I came back laden with ancient apples (the variety rather than the produce, I mean), a couple more flavours of honey (melata – honeydew, and millefiori – a thousand flowers!) and some bread and cheese (pecorino – sheep’s milk cheese – I forget where this one was from, Sardinia maybe?). Now, on to catching up on some Italian lessons from last week… 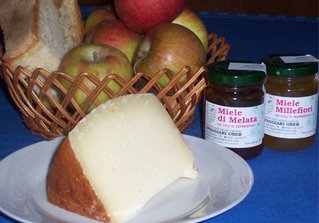 One Response to Parma weekend