Corrie passed along the important news about World Nutella Day which is coming up very quickly, on February 6.

Last night a group of us shared a box at the opera to see The Damnation of Faust. Reviews from our company were mixed, but I think it was agreed that overall the second half was better than the first, all beautifully sung of course, by a very large cast, but possibly overwhelmed by some of the visuals that were projected over the proceedings, and the choreography and circus work were a bit much. All in all I enjoyed the evening, though thought I sensed a touch of Lord of the Rings in the depiction of hell, and a lot of loin cloths were used in the making of this opera. Anyway, can’t come to Italy and not see opera, even a French one, so I’ve got that one under my belt. 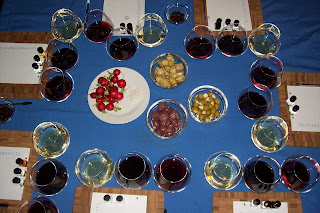 We have been having “sniff parties” chez nous. MJ has a pretty comprehensive wine aromas kit which we’ve been working our way through with some diligence. We sniff 18 different bottles containing everything from acacia to leather to chocolate to mushroom to smoke, and then sample some wines to see what we can detect in them, and then we eat nice food. This week’s menu featured MJ’s gazpacho – an unorthodox version apparently as it lacked bread, but it was beautiful without – and the near unpronounceable kolokythokeftedes (zucchini cakes with feta and mint). Mint was actually the hardest ingredient to find, but I bought a bag from an erborista, which wasn’t quite right so to me it tasted a bit like mint tea, but it went down all right with some tzadziki. Corrie brought an Orange- cheesecakey- moussey- souffle- kind- of- thing, I think that was the official recipe name, and topped with blood oranges it was delightful.

We kept our menu quasi-vegetarian because we’d spent the afternoon doing a meat tasting, which was exhaustive and somewhat overwhelming: 21 different meats I think. I’d missed the salami tasting before Christmas, and this time we were doing only cured meats made from whole cuts. So we had prosciutto crudo e cotto (raw cured and cooked hams), some smoked hams and a couple of different kinds of lardo which were surprisingly good, even if we did have to take them without the requisite hot toast. 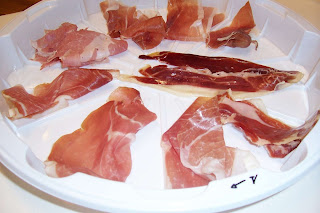 Many prosciuttos: 16 months, 24 months, crudo and cotto, smoked and salted. 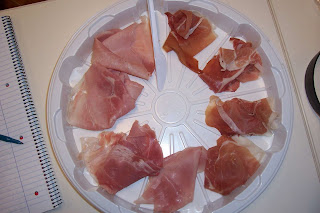