Had a last supper in St John’s on Monday night from the Afghan Restaurant on Duckworth Street. A tiny place where granny literally cooks homestyle, on a home-sized stove in the back of a place that would be stretched to seat 12 people, the food is delicious. Not pretty, at least in my takeway, but the lamb was melt-in-your mouth, the rice excellently seasoned, and the naans stretchy and tasty.

And I confirmed that I was indeed experiencing a nouveau spring (after experiencing a record number of them this year: Victoria, London, Parma, Alicante, Saskatchewan and now Newfoundland) as the lilacs were just opening in St John`s.

Spent a last morning in The Rooms, which are big, but I didn’t feel they were terribly well laid out: everything a bit too chopped up with the art gallery divided between different floors. Still, some interesting things there, and some exciting sounding art to come in the galleries. I liked the Merchant Vessels functional pottery show, and in the museum there was a display of a couple of Innu caribou hide coats that blew my mind. Called pishakanakup, they were made of fine, thin hides: summer wear for caribou hunters, their designs intended to flatter their patrons, in colours intended to invoke caribou (the reds are to mimic caribou blood). According to the display only 30 such coats exist in Canadian museums.

In the seabird display, I was entranced by the story of the Razorbill, which is rare and the closest living relative of the now-extinct Great Auk. Apparently the chicks hatch and launch themselves into the ocean before they can fly, where they are tended by their fathers for the two months it takes them to fledge!

That wore me out and I went in search of food. The tomato soup with juniper berries was not good, but the salad was 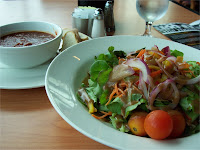 and so was the view of the harbour (where I was standing the morning before is centre left at the harbour mouth).

Then it was goodbye Bond Street

hello Halifax cloudburst (right on our baggage as it was being unloaded!)