Last week I attended the opening ceremonies of the First Nations Collection at the Cowichan Valley Museum in Duncan, which includes paintings, carvings, masks and artifacts from local artists. The ceremonies consisted mainly of some drumming with dancing by local boys 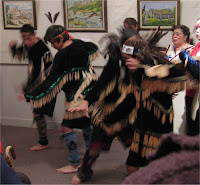 and a couple of mercifully short speeches by the museum curator and the First Nations cultural coordinator, after which the overcrowded room emptied into the rest of the museum – not a huge place – to enjoy a little buffet which featured smoked salmon candy and smoked salmon & cream cheese wraps with capers and dill, and lots of sweets.

It’s local election time here, so I went to an all-candidates meeting last night, curious to hear the talk and see the one candidate (for mayor) who thought food was worth mentioning. His platform is built on the ideas of self-sufficiency and local autonomy that heated up a room in the downtown library last summer, at a town hall meeting on food security. Aside from Harald Wolf’s comments, there was no discussion of food, and no questions from the floor or the organisers. The closest they came was to talk about the berming of Panama Flats (sounds like a Woody Guthrie song title?) which all candidates who answered the question agreed was suspect activity, said they doubted the agricultural purpose of the berm, expressed concern about environmental consequences of messing with the drainage of these fields, and affirmed they planned to fight to keep the land in the much-abused Agricultural Land Reserve. In terms of what could be inferred about the 13 candidates from their appearance, one point I noticed was that only two candidates (Wolf and Brownoff) brought their own water in re-usable water bottles; 12 of the 13 had bottled water sitting in front of them – it appears only Wolf had had declined it.

One thing I enjoyed about the meeting was the timekeeping. Organisers used a yellow/red card system: a yellow card was a warning the time was nearly up; a red card meant stop talking and sit down. How I wish this had been in use in some of the poetry readings I’ve been to in my day. 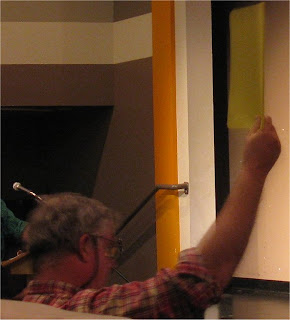