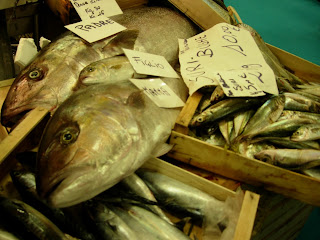 Two fishy events last week. The first was an enlightening visit from a veterinarian, Valentina Tepedino, whose topic was fish quality. We embarked on a pre–prandial nightmare into nematodes and parasites (anisakis), poisons (tetrodoxin) and various aspects of fish fraud. Here is a small fraction of what she talked about.

Likewise there is well documented fraud involving other fish varieties; a farmed fish, Pangasius, a sort of catfish, is often passed off for sole. It’s so cheap to produce that with strategic employment of some equally cheap labour, it can be filleted to resemble sole and sold for many times its market value. Solea senegalensis, a farmed variety from Senegal, is often sold as the much more expensive Dover sole; it takes skill and experience and a close look at the whole fish, skins and gills included, to distinguish one for the other.

Another big fraud is passing farmed fish off for wild. Though there is a popular misconception that all our cod is wild, the Norwegians have in fact developed a highly successful farming industry. Salt cod (bacalau) is popular in markets like Italy, Spain and Portugal, but much of what reaches the market is either farmed or one of many cheap varieties such as pollock and hake that are almost indistinguishable from cod once decapitated, dried and salted.

And there is the fish product known as “surimi” which is pulverised whitefish (often those cheap farmed staples, pollock and hake) coloured with paprika and reformed into imitation crab, lobster, prawns, eels (anguilla). But often only a percentage of this is actually hake or pollock, as it’s often mixed with even cheaper ones.

One key area where it becomes dangerous to substitute one fish for another is in the area of, for example, pufferfish, which can be passed off as monkfish, as the two are nearly indistinguishable when skinned and decapitated. But pufferfish carry the lethal neurotoxin tetrodoxin which can cause death in as little as five minutes, an risk that eaters of Fugu undertake voluntarily, but not something the average monkfish eater would expect. One instance of this kind of fraud in Italy was enough to ban the sale of monkfish without heads, so that consumers can be sure which fish they are buying.

As always it’s a case of buyer beware, and educating yourself about the sometimes huge and complex issues to to with identification, sustainability, aquaculture and fishing methods. Websites such as Sustainable Seafood, Fishonline, the Marine Conservation Society, MareinItaly and Fishbase are good starting points.

So, thus armed, I was interested to see what was on display at Slow Fish in Genova yesterday, a good mid-sized exhibition with lots of tastings and workshops. 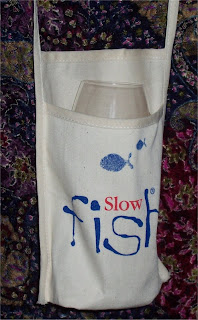 One of the most popular points was the enoteca and bistro where you gained admission by buying a cotton nosebag (actually a glass holder, equipped with a wineglass ready to be filled from over a thousand different bottles). There was a selection of food, including oysters and shellfish and other seafood tastings, some pasta dishes, and some local and Presidia products: focaccia, gelato, candied fruit and sugared almonds from Romanengo, and Huehuetenango coffee.

We were excited to experience a rare tasting of the Portonovo Wild Mussels we’d heard so much about – but never seen – during our visit to Le Marche. 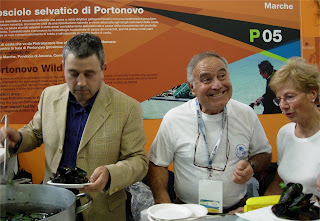 Everyone and his (well behaved) dog was there.. 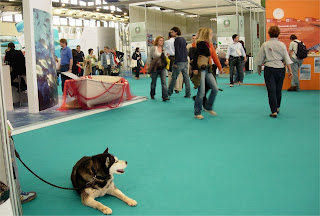 3 Responses to Lots of fish