We had the entertaining guidance of the Guardian‘s very own Matthew Fort to speak to us last week. I have been to many a talk on how to write and on selling your writing, but it never hurts to have a few stern reminders from a guy at the top, like: you can’t call yourself a writer if you don’t write every day. His chief tip is to try to elicit three reactions from the reader: ‘I never thought of that’; ‘that’s really useful’; and ‘I really enjoyed that’.

One side-comment he made stayed with me: British food shops are shooting themselves in the foot by keeping bankers’ hours; the only food shops open at times when their customers are able to shop are the supermarkets, and so they win the business. A remark that goes for other places as well; but he praised Italian food shops for staying open in the evening so that working shoppers could patronise them on their way home. Here in Parma most shops open between 8.30 and 9.30 and close for a very long lunch (12.30 till as late as 4.30) but then reopen for evening trade, until about 7 or 7.30 – which is indeed convenient, seen in that light. Not the first thought in my mind when I finally emerge to do my shopping on Saturdays around noon, but I guess that’s my choice.

We finished our week with Colin Sage, an environmental geographer and crusader for raw milk Irish cheeses. He talked to us about food geography, and specifically about some of the regulatory issues around raw milk cheeses that are helping to draw a scientific noose ever more tightly round the food we are able to buy. He referred us to Marion Nestle, a name that’s been coming up in various places and readings, and mentioned a useful article by our hero Michael Pollan about the rise of a whole new evil that goes by the handle of nutritionism. And he left us with the suggestion that maybe it’s time to grow our own food.

He called on us to shift away from thinking of ourselves as simply consumers having our choices limited and being passive recipients of what might be less and less a ‘whole food’ and more and more a nutrition product. We need, he says, to become food citizens with an active role in asserting values and creating an environment for our own sustenance. Increasing transportation costs mean there will be a higher and higher cost for our food: the current system is unsustainable. We need to be responsible and involved in how and where food is sourced, and grow some of our own food if we can. He advocates alternative food networks: perhaps develop small scale cooperatives for sharing food resources. Fair trade needs to go further than chocolate or coffee, and develop in such areas as fruit that we’ll never be able to grow in northern climates.

Oddly enough I had been listening to a Food Programme piece from last February on much the same theme, where the speaker, Colin Tudge, advocated a “world-wide food club” – a cooperative relationship between good farmers who really want to produce good stuff, artisans, bakers and brewers who are prepared to produce good food from it, and people who are willing to pay for good food properly produced.

Colin Sage has also spent time looking at the structures around our food governance, and is uneasy with his findings. The bodies that research and govern our food supply are suspect: there are well publicised funding relationships between business and research (academics and scientists) and government which is problematic for impartiality: when funding determines what is being studied and how the results may be released, that limits what we can truly investigate and report in all that we need to know about our food. The ‘cosy relationship’ that exists between business and regulatory bodies in terms of who heads them (but where do you find the expertise to head regulators if not in the industries they come in to regulate?) can be causing problems again in impartiality. And food sovereignty means that countries that need to feed themselves are using their own resources to grow export crops, which are more lucrative, but create a world in which food is being grown as animal feed or fuel while their own populations suffer hunger and malnourishment. Sobering stuff; the more so when so much of it is literally echoing down this year, repeated with variations by our speakers and in our readings.

With all that on our minds it could have been hard to gather the strength for a Labour Day picnic in the park but we managed. We spread our blankets on a sunny day in a quiet, walled garden overhung by chestnuts in full flower with a few bouncing dogs in the background – and later in the afternoon some curious soundtracks (Frank Sinatra?) coming from the puppet show in the courtyard of the Castello dei Burattini. One by one we set down our wares, explaining why they were not adequate, which ingredients we’d been unable to find or adapt, why the recipes had not worked as we had hoped, why they didn’t look the way they were supposed to; and one by one we ate the offerings with delight and mutual encouragement. Even halfway through our year it can be a scary thing to share humble food among our ever-more gastronomically enlightened selves. But we all agreed we must do it more often. 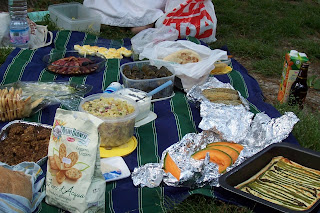 3 Responses to Journalism, food geography and a mighty fine picnic