So, this account is jumping around a bit, but then so did we. 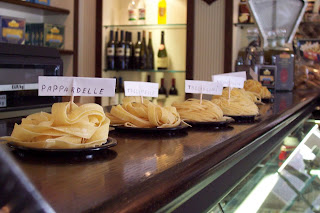 Last Wednesday’s pasta tour of Spinosi was great fun. We found ourselves on another hilltop, in the village of Campofilone, in more glorious sunshine, where we donned our paper outfits and toured the small factory that distributes its dried pasta around the world, and its fresh products locally. 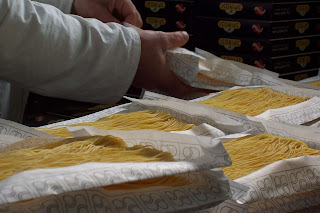 Afterwards, we had a lunch (Spinosini with lemon and prosciutto) prepared by our host Marco Spinosi himself and after that, we did our best to the shelves of the Spinosi shop, and all piled back on the bus to commence our previously reported afternoon of pork. 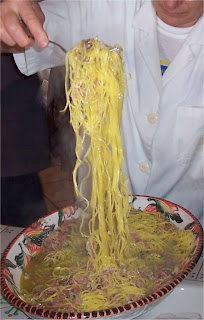 Some of Spinosi’s Spiritosini biscotti for afters; these ones were almond, very nice indeed.

On Thursday, we had another wine talk, from the excellent and extremely well-travelled Gianpiero Rotini, Export Director for Umani Ronchi. He showed us round their cellars, including the new one which is something of an architectural marvel, buried in the hillside, with state of the art brickwork and underground humidification controls.

He was hugely informative and interesting on the subject of wine marketing and shared a lot of great tidbits for our grateful cogitation. He cleared up one area of confusion for me as a wine consumer: the Montepulciano grape is native to Le Marche, but is often confused with a Tuscan Sangiovese product from the Tuscan village of Montepulciano.

He also told us that wine is subject to the most restrictive legislation after food, which always makes for interesting challenges when approaching new markets. He told us about the punitive taxation on alcohol that is hindering European exports to India; the difficulties in distributing to a diverse and segmented market in the US; and the inward regional focus of the Spanish market which make it a difficult one to penetrate.

Italy, he said, was the hardest country to sell wines in. A well-established culture of daily consumption is offset by difficulties in transport and distribution: there is not a good road transportation network (those mountains again!) which makes it hard both to work as a distributor and to ship your product around the country. And a lot of the consumption is local, largely by preference and tradition, so it can be hard for new wines to break in.

On the theme of profit-driven distribution, we heard that international marketing has been subject to the greed that the market economy invites: so the imported wines we often recognise as characteristic of Italy – Chianti, Lambrusco – had in the past swamped export markets simply because they are immensely profitable for export = cheap to buy and can be sold for huge mark-ups.

After tasting some wines (Verdicchio), and eating some lunch and tasting some more wines (Montepulciano), we had a whirlwind tour of the Moreno Cedroni factory, which was apparently in its afternoon clean-up mode, so we didn’t actually see anything being made. Probably most factories don’t need 24 shutter-happy foodies sticking their noses in production, but it was a bit disappointing to be whirled round in 20 minutes flat. Pretty jars and interesting ingredients, though. Not everyone can spin a buck from a tin of stewed monkfish tripe, or sea-snail (raguse) with tomato, garlic and wild fennel. And the fig and tangerine marmalade sounded promising, though I couldn’t see any back at the shop at Umani Ronchi. So I satisfied myself with a bottle of top-flight dessert wine (Maximo) and another of Montepulciano (Cumaro, named for the small red berry that grows on Monte Conero).

Our day ended, more or less, with a fabulous shop-a-thon at Azzurra, a purveyor of all things Marchese (“vini e tipicità delle Marche“) in another seaside town, Numani. Upon first arrival we pressed our noses hopefully against the windows, which were ominously dark: oh no, said someone, it’s Thursday afternoon. Which of course is the giorno di chiusura we all know and love (not) in Parma, which makes those from twentyfourhoursevendayaweek retail cultures stomp their feet and wave their credit cards in rage. But of course this tale has a happy ending: somehow we managed to get in the door and buy, buy, buy. I’m still not sure if it was by special arrangement, but we think our saintly driver Franco might have had a hand in it…