Last moments at the writers and artists colony

So, Tracy explained about the Thursday night party which ended the 2006 Winter Colony. As she was in Saskatoon reading from the works of Al Purdy, she missed our final group reading, alas, although she was there in spirit, having composed a sonnet which she printed on wood shavings, glued to bark strips, and left in her place: we were well impressed. And we had studio presentations from our awesomely talented artists, Cherie and Frances, which were just breathtaking.

Here are some snaps of those gifted souls who shared their musical stylings with us.

Brother Kurt happened along and gave us some good old favourites. 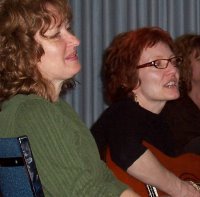 Mari-Lou brought a new classical guitar and a Leonard Cohen songbook to her hermitage and we got to hear the results of her cloistered toil. She’s promised us a full Beatles repertoire next year.

And Terry O’Flanagan – who thought he had come to St Peter’s to re-build the college entryway – became part of the colony, and all the more so (was it the snappy cowboy shirt? the Johnny Cash numbers?) that last night. 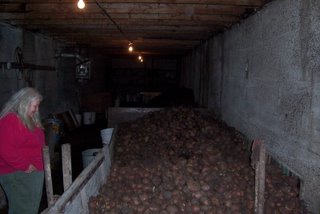 On to the next and final morning. I heard tell there was a food cellar at the Abbey, and I asked our Colony Coordinator Anne if I could have a look, and so this is what I got to see before I left.

And then there was the canned goods collection. Who could not be comforted by all those big, beautiful jars of food? And all of it grown on the Abbey’s farm. Fabulous and delicious. 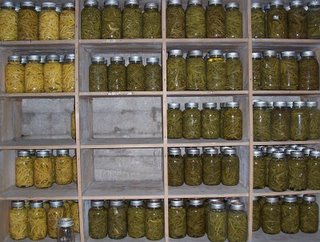 4 Responses to Last moments at the writers and artists colony