The one concert I went to in the London Jazz Festival was a pretty obvious choice: Jazz et Cuisine promised a “tasty fusion of food and music.”

What we got was a treat for the ears and nose: British musician Andy Sheppard playing clarinet and guitar, and wonderfully imaginative Italian percussionist Michele Rabbia playing just about anything – tinfoil, marbles, shopping bags, his face

– as they improvised around the Gallic bustlings of Ivan Vautier 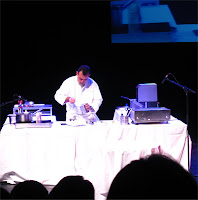 as he whipped up oddities like Pan-fried foie gras with green asparagus, topped with an egg soft-cooked inside a pastry wrapper and served with raspberry butter, 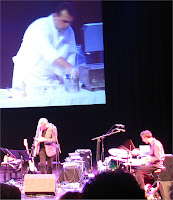 He made nothing I’d particularly care to eat or attempt to cook myself (even if I had some of the molecular gastronomy kit he was using), but it smelled wonderful and was engaging to watch.

And just as well it wasn’t to my taste since the curious British obsession with Health & Safety meant we weren’t allowed so much as a nibble, since the stage of the Queen Elizabeth Hall isn’t a licensed kitchen, and is therefore presumably considered toxic. 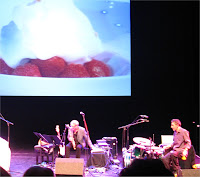 What we did get was a “special offer” to show our tickets at the cafe, and receive the opportunity to buy a plate of French cheese and a glass of Merlot for “just £7.50”. I passed, in favour of a nice piece of orange & lavender cake and a mineral water for about half the price. Hmph.