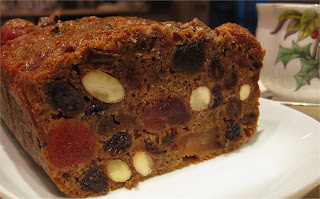 Just wanted to say a few words in defence of fruitcake. I too remember those sickly sweet crumbly marzipan-topped atrocities of yore. But I also remembered Michelle’s mother’s cakes as being the ones that won me over. I’d been dithering over about four pounds of mixed raisins, sultanas, currants and dried apricots that were growing plumper and plumper through repeated applications of calvados and apricot brandy; I craved fruitcake but couldn’t find a recipe that appealed, until Michelle sent me hers, which was a relative of this one; it features grape juice and 10 eggs and a quart of brandy, and at least 48 hours spent soaking the fruit. It is unspeakably good.

I didn’t include any citron in mine, but was thinking about a dinnertime conversation I had recently about this fruit. I used to see it in the markets in Italy, where it is called cedro. We were wondering if the liqueur my friends had had in Greece – Kitron – might have been made of that rather than lemon, and indeed this seems to be so.

Could wine be considered sour grapes? Vinegar could, anyway. I’ve been thinking about sour foods in recent months, after picking up on some local buzz about natural fermentation over the summer.

Back in 2003, Sandor Ellix Katz published a book – Wild Fermentation – which has become wildly popular; I believe I actually saw him floating around Terra Madre with his last copy so didn’t manage to secure one there, but the ideas intrigue me (and I have his latest, The Revolution Will Not Be Microwaved, lined up on the bookshelf). So when I picked up a nice seasonal cabbage during a farm shop swoop the other day, I thought I should try my hand at sauerkraut. Starting a little late to have it ready for Christmas (one of those family tastes I’m wild for is our tradition of having sauerkraut alongside turkey – something about sauerkraut and turkey gravy…) but could start the new year off right.

It’s a simple thing to do: all you need is salt and cabbage, and somewhere to put it (I hear reports about its fermentation aromas which suggest you might want some distance between you and the crock while it’s doing its thing). A recipe from Mother Earth News makes it sound easy, and the benefits extolled include a possible cure for Avian flu and cancer prevention.