Four and a microphone

Busy times… I took in four interesting and very different readings and talks in just over a week. From Byzantium to North Van; from the farms of Milwaukee to forms of aging.

Chronologically, we start with Myrna Kostash, 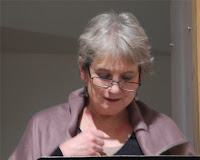 who read and spoke at the Open Space Gallery on January 20, launching her new book, Prodigal Daughter, an exploration of Byzantium and the Eastern Christian (Orthodox) Church. It was a cold, wet, miserable night but a warm and engaging discussion (Where does the East begin? How does Demeter relate to St Demetrius?)

Next up was David Zieroth 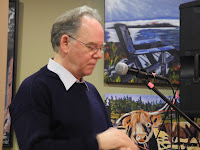 who read – at Planet Earth Poetry – some of his fine work from The Fly in Autumn, as well as some new writing. 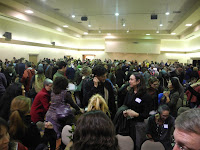 to hear urban agriculturalist Will Allen

talk about his work with Growing Power. He showed some 700 images of Growing Power’s many projects – mostly in the US but a few outside the country. His basic ideas are: that everyone deserves good, nutritious food; that it’s possible to provide this by intensive growing in cities; that the foundation of nutritious food is good soil, and it’s possible to provide this by composting. Which he does on an enormous scale, turning over truckloads of unsold warehouse fruits and vegetables with backhoes, and cultivating billions of worms to finish the job once the compost has been mostly broken down. He declares himself to be in direct competition with the landfill: showed us a picture of a garbage truck door that boasted the company had created 17,000 acres of wildlife habitat, and quipped “all I’ve seen is seagulls and really big rats.”

He shows that you shouldn’t let a little thing like lack of land to grow on stop you: he plants into 2 feet of compost, on top of concrete and tarmac, in abandoned industrial sites and on top of lawns and flower gardens. At its Milwaukee site, Growing Power produces a year round supply of herbs and greens in greenhouses; and is gaining some fame for its work in aquaponics, raising tilapia and yellow (freshwater) perch. Allen’s greatest interest is in teaching children about food and agriculture, and in providing disadvantaged people with the knowledge of how to produce food, as well as process and market it.

Too much time is wasted, he says, talking about urban agriculture: you need to get out there and do it. Create a project that will act to educate and motivate others in your community, that they can volunteer at, work on and buy from.

He’s big on creating networks that are inclusive and that reap tangible benefits like the space to grow food, and the tons of waste he diverts into his composting projects. When people sniggered at the picture of Wal-Mart execs touring his farm, he said “We need everybody at the good food revolution table. We can’t do it alone. The days are over when we exclude people and organizations.” And added, “Our families and friends work at these places.”

talk about aging. We were bemused to see what a draw this topic is… Mate was blunt, opinionated and controversial, offering a blend of personal wisdom about the interconnectedness of the body, emotions and spirituality. When considering aging, he says, we are considering death, and that is why our youth-obsessed culture is so reluctant to permit it. In planning our lives, knowing they are finite, we should aim to leave the world as we entered it, with no baggage. By which he means we must discard the constraints and emotional demands of the world to be other than who we are.

His ideas on physical health as we age are quite simple: read Andrew Weil, get exercise, eat good food, and eat less. He moved on to some ideas about health and illness, saying that what he concludes from his experience in palliative care is: who gets ill is not a matter of fate. Nor are genetics the key to health and longevity: it is something of a no-brainer to say that there are too many variables in a person’s life, and genes are turned on and off by the environment.

To answer questions of illness, he says, we need to look at people’s lives. He read from a few obituaries and observed that so often in obits we celebrate the qualities that kill people: compulsive concerns with the needs of others to the neglect of their own. “When you don’t know how to say no,” he said, “your body will say it for you.”

Because the emotional centres in our brains send out hormones and chemicals that affect our physiology, it is not possible to draw a distinction between physical and emotional health when treating an illness; and if you suppress emotions, you also suppress the immune system. “Emotions are not luxuries: we have them in order to survive.” There are two primary emotions: fear and love; everything else is secondary. Love is about the human need for primary support.

There was a short unplanned interval while one of the audience members suddenly fell ill, but luckily there was a doctor in the house, and after ensuring that the man would be ok and the ambulance was on its way, Mate returned to the podium with a few words on dementia. It is not enough, he said, to keep your mind active with intellectual explorations; you must also maintain and develop emotional authenticity, because the biggest emotional stress you can put yourself under is trying to be other than you are.