In Our Food, our Future last week, the topic was the impact of high food prices on those with less disposable income, where the proportion of monthly income spent on food is escalating with possibly dangerous results. Some interesting issues raised. The rise in obesity among poor people, because fatty, sugary foods are cheaper than better quality ones. The lack of practical food skills (selection, preparation) among those who need them most: young, pregnant or breastfeeding women, single parents, students. The difficulty of feeding ever-hungry teens on a small budget. And the economic risk of experimenting with cooking or dietary change: if you are on a very tight food budget, with children to feed, monotony is a big problem, because you must stick to foods with a long shelf life (fatty, sugary, highly-processed) that you know how to portion and prepare, and that your family will eat.

It’s been party time in Victoria. Last weekend was BC Day, and the crowds were out in the inner harbour, 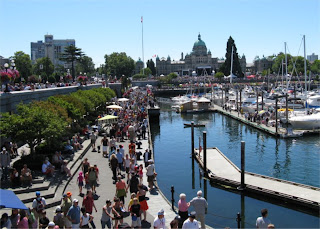 the Snowbirds did an impressive flyby. 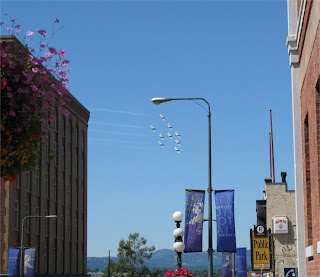 I didn’t stay for the evening’s open-air entertainment which included Burton Cummings, Feist and Sarah McLachlan, because I had food to think about.

The Himalayan blackberries are in season now, though I suspect people are not picking them because there’s a rumour about (repeated to me with my berry pail at every turning) that they aren’t ripe until the end of August. Ok, so believe that if you wish. I believe with mine eyes and mine palate and mine berry bucket. 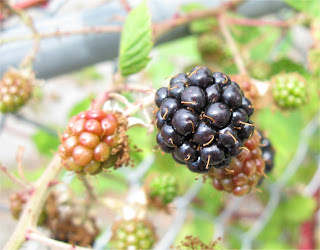 During an irresponsible visit to some farm markets, I bought loganberries and giant boysenberries, which for scientific purposes I compared in my berry line-up, in order of size, with a Himalayan and a native blackberry. 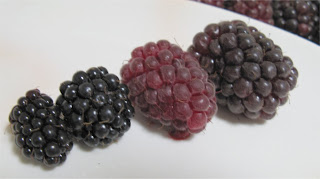 Then, because my apples are ripe and my berry pail full, I made pie. Rather good with Udder Guy’s strawberry ice cream. And for those who say to me “but don’t you get tired of zucchini?” I can only laugh sadly and smugly. There’s soup to be made, chocolate-zucchini cake of course, but also zucchini parmigiana as earlier mentioned, and this wonderful thing which I sampled last April (paired with smoked provolone) at the wonderful La Croce di Malta in Parma. I thought the proprietor was calling it zucchini escabeche, but in fact she was saying Zucchini alla Scapece, 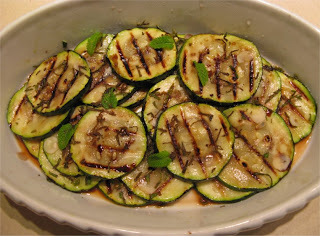 which is a superb Italian cousin; by her account from Sicily. It’s a wonderful substance, featuring fresh mint, garlic and vinegar and – best of all for dinner party purposes – a good long sit on the kitchen counter. I read that its combination of sour and sweet flavour signals its origins in Spanish cuisine, and its roots in Spanish-ruled parts of the country.

One Response to Food price issues for low incomes; BC Day, blackberries and zucchini