I braved the pelting rain to get to the Restaurant Show at Earl’s Court last Tuesday, where I saw lots of stands – including some small food producers I’d been learning about while working on our food producers’ database (which launched on Wednesday, yay!). It was lovely to meet the people and taste the food I’d been writing about. I then sat myself down at The Stage and watched some cooking demonstrations. The first was from Barny Haughton, 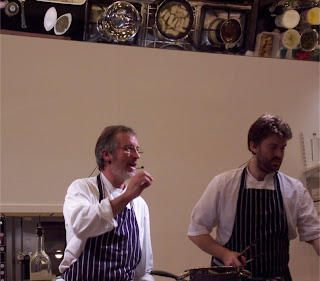 who talked about sustainability in the commercial kitchen: inviting people to use less popular, cheaper cuts of meat – if we’re going to be carnivores it’s more responsible to use the entire animal, which is a theme I’ve been hearing for some time – and sustainable fish varieties. He was followed by like-minded Cyrus Todiwala, 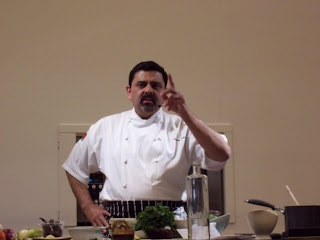 who was speaking on behalf of the Greener Food project. He’d been sent a big box of locally-raised, seasonal vegetables and told to make something of them. His beetroot with coconut salad was terrific, as was everything else he made. We were as heartbroken as he that he didn’t have time to make us his pigeon curry…

Then Ian Pengelley, another London chef, took the stage – by this time things were running very late and it got a bit chaotic. His aim was to show us how nicely champagne went with Asian foods, so we got to try a bit with some Thai beef salad, some sushi rolls and some seared scallops. And sure, we agreed! All very nice. 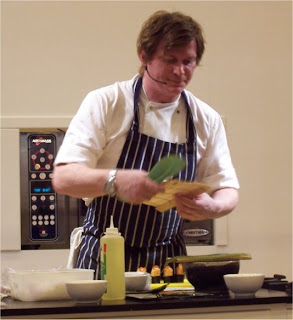 His sommelier was very entertaining – giving us a finale show where he decapitated the last bottle by strategic use of the base of a champagne glass. Definitely not one to try at home.

Then I had a couple of evenings to catch my breath before Friday’s Les Murray reading at Senate House – certainly one building that can accurately be described as neo-brutalist. This grey edifice loomed ahead of me in the dying light, and I sensed trouble ahead as I sought the room which my note to self said was “3rd floor Senate North”.

I entered from a sort of westerly door, I thought, so turned left, looking for north. I found a lift just around the corner, with a notice posted about talks and lectures — including the one I was after, so without anything more to go on, I entered and ascended to the 2nd floor, which was as far as this one went.

On the second floor there was another lift that went up to the 4th floor, but there was a 3rd floor button as well, so I pressed that and pushed my way out through a crowd of students to find myself on a near-deserted floor, where the only open door was to some special library – ancient civilisations or something, with an ominous No Exit sign on the entry.

Not a soul around, so I lugged myself and the bag I was escorting up to the fourth floor, where I found the crowd of students from the lift forming a lengthy queue for library card renewal. Beyond the security gates (only passable by library card holders of course) I spotted and hailed a friendly looking woman in a name badge who told me I wanted room N336. She told me to get back in the lift and go to the ground floor, along the hallway to a different set of lifts.

So back I got in the lift and descended to the ground floor where I found myself facing another set of card-operated barricades and a silver-haired defender of.. of.. whatever it was he was defending seated behind what I’m sure must have been a bullet-proof glass window. He told me I shouldn’t have come to the ground floor in this lift and that I should go back to the third floor as he presumed I was a member of the society for ancient civilisations or whoever it is who lives up there. No, I said, I was looking for the poetry reading in room N336. He said he knew nothing about a poetry reading or any such room, and couldn’t tell me whether I was actually in the north tower or not. After admonishing me again for coming down in that particular lift, and reinforcing his point that this was not an exit, he let me exit through the gate and I was back in the main hallway ready to search out the next set of lifts.

Which I found and ascended to find a big classroom with two doors (one marked 336 and the other 336A) but no other indication there was a reading there. I entered and found a bookseller setting up and three others sitting in wait, which seemed a bit sparse since it was only ten minutes to the reading, but down I sat. The room did in fact fill up nicely by the start time, and Les Murray started his reading. For the next hour, we were entertained by his poems and by the periodic rattling of the door knob closest to the reader (on the door labelled 336, in fact) followed by the covert entry of latecomers through the other door. There followed a wine reception and then it was time to slink off into the night.

I made a nerdy list of the poems he read, and here they are; rather unkindly he read from the Australian edition of his collected poems, so those who rushed the book table afterwards were not always able to find their favourites, but he sold quite a bit and did a little friendly book signing. I was happy he started us off with a food poem, and I liked (and remembered from past readings, I think), his cow poem, which he introduced by saying it was one of his favourite animals, and that he thought he was one of the few real Hindus of Australia. It was a poem from the point of view of the cow, which he observed is a ‘collective creature’ and thus difficult to find a pronoun for.

Beanstock Sermon; Glass Louvres; Words of the Glass Blowers; On Removing Spiderweb; Arial; Cows on Killing Day; Cell DNA; Contested Landscape at Forsayth; The Shield Scales of Heraldray; the Moon Man; Judged Worth Evacuating; Clothing as Dwelling as as Shouldered Boat; Visitor; Jellyfish; Reclaim the Sites; To One Outside the Culture; Melbourne Pavement Coffee; On the North Coastline; Me & Je Reviens; Japanese Sword Blades in the British Museum; The Mare Out on the Road; Birthplace; Sunday on a Country River; and then he finished with a few new poems.