Last weekend’s Vancouver Island MusicFest was the usual mix of heat and song and generally friendly and happy crowds. 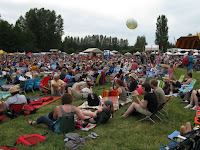 Not the greatest music ever but as always, there were some highlights. Unfortunately the headliner – Roberta Flack – was at the other end of the scale, offering a late-starting, faltering Friday night performance punctuated with odd ramblings. I will go on enjoying her early moments and be grateful for those at least.

I always enjoy a bit of David Lindley, who had to cancel last year so gave us some multidimensional quirkiness this.

Nanci Griffith was a good ‘un, a reliable performer who understands the importance of her backlist and gave us a good mix of old and new. I could have done without the breast-beating over the BP oilspill, though; Amerocentrism is a tiresome thing at the best of times. It gets me to musing that she and others anguishing over the inevitable could get some useful perspective with a visit to Nigeria… and if folk songs don’t solve the problem, they could always sell their cars.

Some old favourites returned: Winnipeg’s charming group Nathan were sweet and entertaining. The heat was blasting by the time they came on at 5pm and I was happy to view them from a few inches of shade I managed to cosy into in front of the stage. 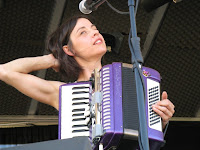 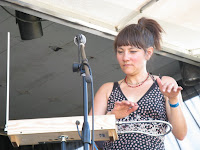 Meanwhile, the food swung from the awful to the pretty good. My prize for the worst value meal goes to Bali, the Indonesian stand. Posing as “Vegetable Curry”, this $10 Chinet platterful of rice was nothing more than tinned Chinese vegetables – palm shoots and baby corn – in a coconut curry sauce. Priced the same as their meat dishes, which is just wrong. Good profit margin for them I guess. May they burn their tongues in hell’s kitchen. 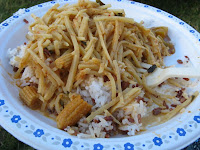 Moving up the scale, I give the Gourmet Burger wagon’s yamburgers a thumbs-up for presentation (I liked the paper bag wrapping) and use of ingredients from local farms and food producers. Thumbs down for pricing it ($8) the same as the beef burger. 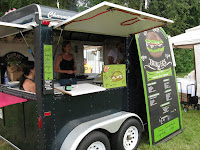 Old reliable: Woodstock’s Smokies continue to be the best I’ve ever had. Bavarian smokies are my choice, but the Gardener’s Revenge (venison) was once again a hot seller. I don’t know if the venison was local, but from what I saw wandering around the roadsides, I would guess there are more than enough deer to stock a few folk festivals. 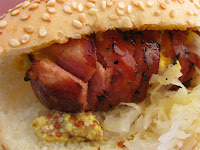 Plastic water bottles were banned from the site, so you could refill your own from the water wagons that circulated constantly over a hot and thirsty weekend. 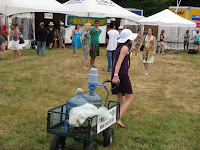 I’ve never been a fan of Kettle Corn’s sugary salty combination, preferring my popcorn salted, buttered and served with movies, but was entertained to see what kit you need in order to make festival-sized batches. 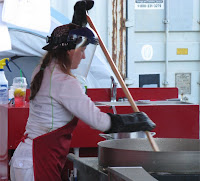 The best food on the weekend was, of course, breakfast at Fanny Bay

served al fresco in the balmy morning air, in the company of an affable group of the like-minded. 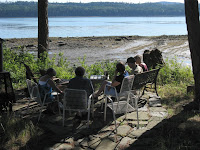 Before breakfast I foraged a few berries – thimbleberries are ripe and difficult to pick, and salal berries are starting to ripen. 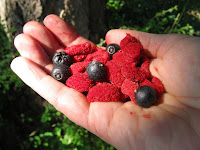 Favourite performance, hands down, was Joan Osborne, singing with The Holmes Brothers. The album the music tent did not have on sale – at least not when I was there – was Breakfast In Bed, which features this cut: