Wednesday I joined – at a guess – around 70 farmers from Vancouver Island and Gulf Islands for a Farmer 2 Farmer information exchange. Bob Maxwell, Linda Geggie and Barbara Brennan 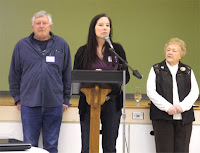 introduced the day, and then Pat Reichert

of Island Natural Growers on Salt Spring Island kicked off with a keynote address. She talked about her research into food production on Salt Spring, a task she describes as “not for the faint of heart, or those with short attention spans”. She found that around 96% of the produce consumed there is imported; and that the change to BC’s meat regulations had a devastating effect on Salt Spring meat production which dropped 50% in the face of requirements to ship all animals off the island for slaughter and butchery.

Island Natural Growers created a demo project – Farm Food Link – to help local organic growers distribute their products to local businesses and institutional buyers on Salt Spring. It’s now a going concern called Growing Up Organic. ING has also partnered with the local Farmers Institute and the Chamber of Commerce, Salt Springers for Safe Food and the Earth Festival Society to form the Salt Spring Food Alliance. They’ve achieved much in a short time through an over-arching Infrastructure Project. There’s a packing and distribution centre in the works, which would provide a central point for small farms to ready their goods for market; an abattoir project, which will provide a mobile abattoir offering both slaughtering and butchery services for Salt Spring (to be shared with Pender Island); and a community compost project. There’s a land lease project in the works as well to improve access to affordable farming land on the island.

Thus inspired, we were invited to join a couple of sessions on topics ranging from Increasing Profitability through specialization? Diversification? Both? to Emerging Food and Ag Business Opportunities in the Region to Integrated Pest Management: What’s bugging you?.

I was at the Pollination Power talk, where we heard from pollinator activist Nathalie Chambers and beekeeper Ed Banas.

Nathalie Chambers’ monumental fundraising efforts to save Madrona Farm have been followed by work with The Land Conservancy where she leads the Pollinator Enhancement Program. Wild bees, she said, are under some of the same threats that are decimating honeybees: loss of habitat and nectar sources, diseases and pesticide use.

She proposes three simple steps that everyone can take to improve the lot of pollinators:

Ed Banas talked about pollination from a honey bee keeper’s perspective; about the hazards we create by a fondness for pristine lawns (dandelions and white clover are excellent food sources for bees). And it’s not just the immediate deaths from pesticide spraying that are problematic, he noted, but the generational deaths that follow, when contaminated nectar and pollen are taken back to the hive and fed to the more vulnerable young. He also talked about the crippling effects of using coated seeds, which are treated with fungicides and/or insecticides; when they germinate, they exude a kind of sugar that bees take back to the hive together with its hidden load of pesticides. Corn is particularly often treated, but so are many other seeds: he strongly advises people check seed packs to make sure they’re uncoated.

There was a break and time for another couple of sessions. I dropped into Marketing-it’s about relationships? where there was much talk about the ins and outs of blogs, websites and social media; and Random Acts of Agriculture – which was a forum to share ideas and innovations. The latter group had some interesting ideas to float: Nathalie Chambers told us of her “Random acts of cooking” – a dream of travelling from farm to farm on a truck with a coleman stove and picnic table, ready to cook up produce right on the farm, to show people how good and easy fresh food can be (she did this to enthusiastic response at Madrona’s farm stand until VIHA caught a whiff and shut it down).

Other suggestions included telling consumers that eating good, local, organic food is within reach of almost everyone: you don’t need to commit all your resources, or blow your whole income on food, but buying just a little – a flat of organic blueberries here, a few heads of lettuce there, a pound of local garlic – from a lot of farmers would help them enormously. There was some puzzlement by the farmers present over the misperception that supporting businesses like the Red Barn and the Root Cellar was equated with supporting local growers, when both of these outlets import most of their stock. They were also peeved by the latter’s marketing slogan (“Farm Fresh, Dirt Cheap”) which is simply untrue as people should know by now: good food costs more, and cheap food really isn’t. Don’t worry, said someone, the global economy will take care of that: once cheap oil is taken out of the equation, the profit margin won’t be so attractive for imported food.

A couple of the farmers talked about grain growing on Vancouver Island. One, a hay producer, explained that the market for hay has tanked and that the Island’s hay fields could easily be converted to grain growing, but there’s a lack of infrastructure for other aspects of the process, like milling and grain storage.

Unfortunately taking all that in meant missing Mary Alice Johnson’s talk about Land Leasing and LLAFF (Linking Land and Future Farmers): a regional land registry and database to link up those looking for land with those who have land they wish to share or lease.

After lunch there were roundtable sessions, giving a bit more time for questions and answers about growing new farmers, marketing, government funding, agricultural infrastructure and more. A lively and useful day… may there be more!